Last week, Hickman divulged on Twitter that Vindman “really talked up” President Barack Obama and ridiculed America and Americans in front of Russian military officers when Hickman worked with him in Grafenwoher, Germany in 2013. Hickman said that he “verbally reprimanded” then-Major Vindman after he heard some of his derisive remarks for himself. “Do not let the uniform fool you,” Hickman wrote. “He is a political activist in uniform.”

The Times characterized Hickman’s account as “unsubstantiated,” even though it was backed up by his boss at the time. And on Friday, a second individual who witnessed the incident, provided American Greatness with a statement saying Vindman “was uncomfortably supportive of Obama” and “almost self-hating of white Americans.”

While Vindman is frequently described in the media as a patriot and a Purple Heart recipient, Hickman was described by Times reporters Mike McIntire and Nicholas Confessore as a “Florida man” and “fan of QAnon” in the story’s fourth paragraph.

As American Greatness reported on Monday, Hickman is a wounded warrior who fought in Afghanistan and Iraq and received multiple combat medals—including the Purple Heart. He took medical leave from the service in 2017 due to complications from his injuries, and now resides near Tampa, Florida.

The picture below was taken of Hickman in a bunker in Kunar Valley, Afghanistan following a firefight in which he had lost some men. 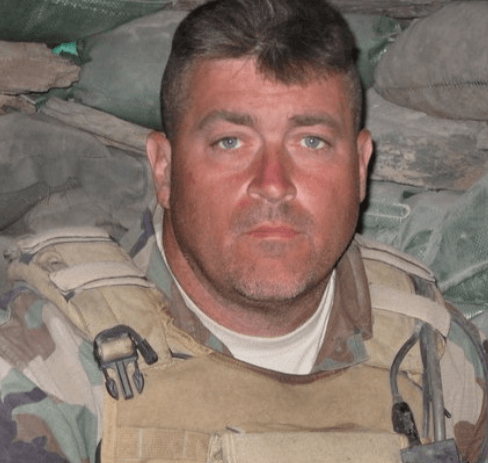 McIntire and Confessore suggested that Hickman coordinated with the White House to smear Vindman, noting that President Trump hinted over the weekend that information regarding Vindman’s partisanship would soon be coming out.

“You’ll be seeing very soon what comes out,” Mr. Trump told reporters on Saturday. The Times suggested that the information was coming out in “the dark corners” of the internet via Hickman.

Mr. Trump was not more specific. But an attack on Colonel Vindman’s character and motives was already making its way from the dark corners of Mr. Trump’s social media following to the front lines of the impeachment battle.

One day earlier, the right-wing commentator Jack Posobiec had retweeted a lengthy thread by a Florida man — a fan of QAnon, a fringe conspiracy about the “deep state” — claiming to have witnessed Colonel Vindman “bash America” in conversation with Russian officers during a joint military exercise in Germany in 2013.

Hickman shot down the insinuation that he was working with Trump, telling American Greatness: “I’ve never spoken to anyone in or associated with the White House, or the Trump campaign, or anyone associated with President Trump.”

The Times article goes on to claim that Hickman’s accusations were “unsubstantiated” and “rejected by some of the colonel’s colleagues.”

But Hickman’s former boss, Thomas Lasch, a highly respected simulation strategist at the Joint Multinational Simulation Center in Grafenwoehr, Germany, corroborated his story on Twitter and to American Greatness.

“Jim, I remember exercise ATLAS VISION and this incident. I was your Boss at the time and was satisfied when you told me that you ‘took care of it’ (meaning then MAJ Vindman’s disparaging comments about the U.S. to the Russians ) and I just put things together this past week,” Lasch tweeted.

Lasch vouched for Hickman in a second tweet: “Everyone on this thread should know that Jim Hickman’s patriotism and honesty is unparalleled. He is one of my personal heroes.” He added: “This is not about Trump! This is about an officer [Vindman] that is disloyal to the United States of America.”

American Greatness was able to reach Lasch through his LinkedIn account. He verified that the recently established Twitter account in his name vouching for Hickman was indeed his.

A second individual who witnessed Vindman’s troubling behavior in Grafenwoher, has supplied American Greatness with a statement.

The individual—a General Services Employee with the Department of the Army—wished to stay anonymous due to fear of retribution at his place of work and for his family.

Yes I do remember this, LTC Vindman was uncomfortably supportive of Obama. He seemed almost self-hating of white Americans, and made comments to the Russians during Atlas Vision 13 about how, in my own words, American’s are too big for our own britches and not exceptional. He also spoke in Russian and we really didn’t know what he was saying. I remember giving him shit about it, then telling LTC Hickman about it, and he said something to him [LTC Vindman]. He seemed like a poor performer, not too motivated, and a bit of a sluggish officer.”

Deep into the article, the Times verified Hickman’s credentials, describing him as “a former lieutenant colonel whose service record indicates he served in Afghanistan and earned a Purple Heart.” But the reporters attempted to diminish those credentials by noting in the next breath that he “at some point took an interest in QAnon.”

A review of his past tweets found more than 100 in which he recirculated or commented on QAnon-related theories, including hoaxes about Satanism and pedophilia, and until recently he had the hashtag #Q in his profile. Reached for comment, Mr. Hickman said he did not believe in QAnon but found it “interesting.”

The decorated war hero likewise told American Greatness that he finds QAnon “entertaining” and “intriguing” because “it has predicted things that only legit intel could’ve known.” He added that he just “retweeted stuff for friends I met while recovering.”

To cast doubt on Hickman’s story, the reporters cited an anonymous source and a retired brigadier general described as Vindman’s “commanding officer.”

They said that Colonel Vindman, then a military attaché, was assigned to meet with Russians and gather whatever intelligence he could. He spoke to the Russians in Russian, did not denigrate the United States and reported everything he heard, according to a person briefed on the episode, speaking on the condition of anonymity because the colonel had not publicly testified. Colonel Vindman did not have dealings with Mr. Hickman in relation to his work during the exercise, the person said, and was not reprimanded for it.

Peter B. Zwack, a retired brigadier general who was Colonel Vindman’s commanding officer during the joint exercise, said he was skeptical of Mr. Hickman’s account.

“If there was something egregious that occurred, believe me, we would have had our ears rapped in Moscow,” said General Zwack, who served as the United States’ senior defense official and attaché to Russia.

Hickman said he didn’t remember Zwack but said one reason why the general may not have heard about Vindman’s egregious behavior was because Hickman didn’t file any paperwork on him. “He wasn’t my soldier,” he explained.

Hickman told American Greatness that he informed Lasch because he thought Vindman “might call his boss and whine.” The retired officer said Vindman “was butt-hurt after the ass chewing.”

The wounded warrior wasn’t impressed with the Times’ anonymous source, either. “That’s entirely a fabrication from the NYT. Or Vindman’s twin,” Hickman scoffed.

Mark Hertling—a retired general who is now a national security analyst for CNN—contacted Hickman and Lasch through direct messaging, and verified their identities on Twitter: “They are who they say they are” he tweeted. But he added that “LTC Hickman and I agreed to disagree on LTC Vindman and many other things.”

The Times reporters contacted the retired general, who suggested that Hickman’s recollections did not add up.

“Vindman would’ve been speaking to Russian soldiers in Russian, not English,” he said. “Russians, when they come to these exercises, they don’t speak English — they take pride in it.”

General Hertling added: “I asked Hickman about that, and he said, ‘Well, they were going back and forth between Russian and English.’”

Hickman told American Greatness that he told Hertling that a couple of the Russians did speak broken English, Vindman himself sometimes spoke in English, and that there were other translators at the scene to interpret what was being said. He complained that all of his comments were somehow left out of the article.

It is noteworthy that the Times reporters respectfully referred to the retired “General Hertling” and “General Zwack” by their military ranks in the piece, but referred to retired Lt. Col. Hickman, a wounded veteran of the Iraq and Afghanistan wars, only as “Mr. Hickman” throughout, albeit initially as “a Florida man” and “a fan of QAnon.”

Hickman said the portrayal of Vindman as a great patriot seemed to be part of a concerted messaging effort.

“LTC Vindman wears a civilian suit to carry out his military duties in the NSC, which is exactly what he should’ve worn for to give testimony against the CINC [Commander-in-Chief], his boss,” he told American Greatness. “The only reason he would get his Army Service Uniform out of the closet and wear it in would be to make a ‘political statement,’ perhaps the greatest statement he could make to embarrass the president and set the conditions for him to appear beyond reproach.”

He added: “LTC Vinman is a military staff officer who’s job is to plan, coordinate and advise the CINC. His testimony was in part to question, or provide his opinion on the president’s foreign policy. The president alone sets foreign policy, not Congress, and certainly not a staff officer. He can advise all he wants, but when the President makes a decision, his job is to salute and follow orders.”

The New York Times falsely claimed in conclusion that President Trump “in more than 55 tweets over 47 days” has “claimed falsely that elements of the original whistle-blower’s account had fallen apart or proven incorrect.”

The Times didn’t bother to explain how the president was wrong to say that elements of Eric Ciaramella’s complaint was inaccurate, but back in September, the Federalist’s Sean Davis detailed numerous outright falsehoods found in the partisan anti-Trumper’s account.

Hickman stressed to American Greatness that he was not acting out of partisan political motives.

“Although I’m a Trump supporter, I did this for the office he holds not for him personally,” he said. “Our founding fathers were concerned someday a partisan politically motivated impeachment would occur based on a simple House majority…it appears this may be the case.”