Balanced on the edge of the deplatforming abyss, but still standing, is Vincent James. He is one of the last prominent YouTube video commentators with outspoken views on America’s immigration policies and how they affect America’s electoral politics. Even though his channel was demonetized and algorithmically suppressed, he continues to produce videos that frequently attract over 100,000 viewers.

Even if his arguments were odious, and unsupportable with data or logic, James would deserve to speak his mind. But what makes him dangerous is his arguments are always backed up with impeccable data.

In a recent video, James took on America’s libertarians, calling them out specifically on the issue of immigration. Nine minutes in, he replays a clip of a student challenging Turning Point USA founder Charlie Kirk during a question-and-answer session with a college audience. Kirk repeatedly skirts the question of whether or not mass immigration is sustainable by trying to change the subject to why America needs to attract the best and the brightest of the world. Kirk can’t help but remind his audience that “this growing anti-immigration portion of the Republican conservative movement is dangerous.”

This is a standard response from a member of what James and others have dubbed “Conservatism Inc.” It is condescending and disingenuous. Condescending because everyone knows we welcome the Albert Einsteins and Elon Musks of the world; disingenuous because that’s not the point.

Millions of unskilled immigrants to America will drive down the wages of low-income workers and disproportionately collect government benefits. We are not screening these millions of immigrants for valuable skills, much less limiting entry to the handful of scientific and entrepreneurial geniuses that are scattered around the world.

As James puts it:

The only thing these people care about is keeping the GDP up. Having enough people flow in here who can buy our shiny products for the corporations that we work for. They don’t care about conservatism. Conservatism Inc. hasn’t conserved anything. It’s time for us to challenge them on their dumb, idiotic, false, paid-for ideas. It’s time for us to step in where Conservatism Inc. has failed and take back this country, politically and ideologically. The fact that Charlie Kirk doesn’t care, and says that it’s wonky to talk about the demographic shifts that America has experienced, and what that leads to electorally for conservatives, should tell you everything you need to know.

What mass immigration as it is presently constituted—and has been for the last 50 years—leads to for Americans, is well documented. Drawing on data from Pew Research and others (shown on the table below) are votes by ethnicity in the 2016 presidential election. Among the major ethnic groups, the only one that was remotely balanced in its voting choices was non-Hispanic whites, who turned out for Trump, by a decisive but nonetheless incremental margin of 21 percent. Black Americans, on the other hand, voted 12-1 for Clinton. Hispanics voted more than 2-1 for Clinton, as did Asians. 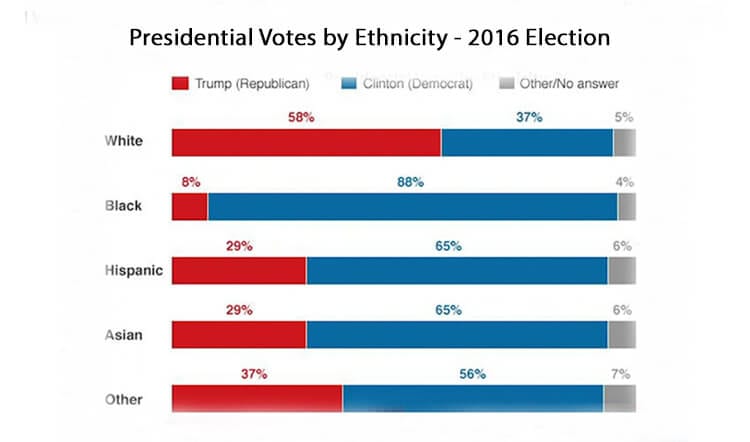 This trend has been reflected in presidential elections for over 30 years, as the next chart—produced by Vincent James—shows graphically. What’s striking about these data is that only white voters are ever likely to be a swing vote. In the 1992 and 1996 elections, a majority of whites did not vote for the GOP. While in the other six elections depicted, white voters did lean GOP, only in the 1998 election did the GOP share of the white vote reach 60 percent.

The historical voting pattern for Hispanic and black voters, on the other hand, is tilted unambiguously toward the Democrats. Out of eight elections, only twice—in 2000 and 2004—was the GOP not outvoted 2-1 in favor of Democrats by Hispanic voters. In both elections, George W. Bush managed to eke out a 35 percent and 34 percent share of the Hispanic vote. For African Americans, it’s never even been close. 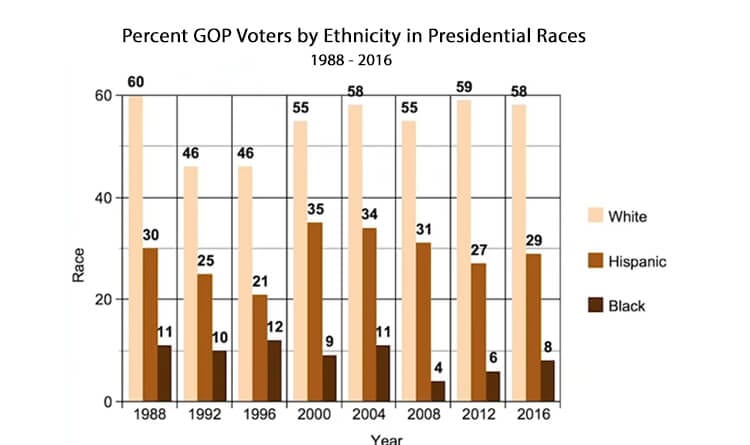 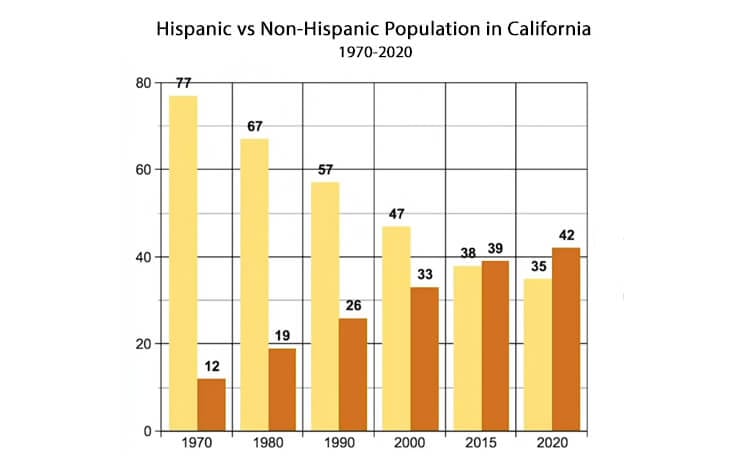 When America’s liberal and progressive Democrats make race and group identity the foundation of their political platform, it is crazy to say that the rise of Democratic power is merely correlated to the fall in the percentage of non-Hispanic whites in the electorate. The question of cause versus correlation is settled. The question to be concerned about is why are whites the only ethnic group to lean conservative? How did that happen? Is it inevitable?

To any libertarian who might find this rhetorical question offensive, and would indignantly suggest “of course we do,” one might respond: prove it. Because the libertarian position on everything from “free trade” and open borders to internet censorship and legalizing hard drugs is the same: It is in lockstep with the agenda of the progressive corporate globalist Left.

On that basis, it would follow that libertarians really don’t care if the national GOP becomes irrelevant, eventually becoming as impotent as California’s Republicans. Or if not entirely impotent, then sanitized and merged into the establishment uniparty, claiming credibility by sporting a photogenic, telegenic, Romney-esque facade of opposition to the more extreme antics of the Democrat’s far-left fringe.

Moreover, on that basis, it would follow that libertarians “only care about keeping the GDP up, having enough people flow in here who can buy our shiny products for the corporations that we work for.”

The logic goes something like this: If open borders means fundamentally transforming the ethnic composition of America, and if fundamentally transforming the ethnic composition of America precludes a conservative resurgence that might undermine the profits of multinational corporations, and if pretending that white conservatives are racist bigots is a way to guarantee that America’s new, nonwhite residents never vote for conservatives—then pass the donations, pretend to protest, and let the Democrat-dominated uniparty turn America from a nation into a commodity.

How Can Libertarians Be As Obtuse As the Liberals They Claim to Oppose?

At the 11-minute mark in the James video, during the same Q&A exchange between Charlie Kirk and an earnest opponent of mass immigration, an illuminating exchange occurs:

Student: What is it, 1.1 million per year, for a country that is only 300 million people?

Kirk: That is a fair question. Here’s a better question. Of the immigrants who are coming, are they coming with skills?

Kirk: I actually don’t think you should design immigration policy based around politics, that’s very dangerous.

To be charitable to Kirk, he’s only 26 years old, and he’s been pushed onto a big stage at a young age. But what he is saying is dangerous, because for the last 50 years, and especially in the last decade or two, politics is all that has driven immigration policy. America’s immigration policy has been based on permitting millions of unskilled immigrants to enter America every year, either legally or through willful failure to enforce what laws do exist.

How Can Americans Preserve Their Culture?

Those of us who have watched the demographic transformation of America unfold over the past decades know that by now the transformative process is already played out. The die was cast in 1985, when then-Colorado Governor Richard Lamm published The Immigration Time Bomb, and 1987, when Ben Wattenberg wrote The Birth Dearth. America is now a multiethnic nation. But that does not mean that America has to be a multicultural nation, certainly not in the divisive, nihilistic parody of civil society version of “multiculturalism” envisioned by the progressives.

The challenge now is to convince the rising new generations in America that ethnicity does not matter, that America will embrace everyone, that assimilation is desirable, that upward mobility is available to everyone, that opportunities are equal and abundant to those with the will to succeed, and that traditional American values of family, faith, freedom, education, hard work, and good character are abiding values that everyone should unite to protect.

Charlie Kirk may wish to consider this: It’s not enough to attract the approbation of Liberalism Inc. Because on one of the most important issues of our time, immigration, we are witnessing a false dichotomy between Conservatism Inc. and Liberalism Inc.

Kirk should ask himself: Would I still have a job if I openly and publicly questioned the dogma of open borders? What would happen if instead of charmingly deflecting the concerns of a student on this topic, I agreed with them, and loudly proclaimed that importing millions of unskilled immigrants each year is unsustainable and will inevitably lead to an electorate that embraces socialism? Would I still get a paycheck? Why not?

What, for that matter, would happen to his employment status if Kirk were to repeatedly wonder as to how much longer America’s institutions can continue to enforce ethnic hiring quotas, when the disparity in academic achievement and scholastic aptitude between Asians and whites versus blacks and Hispanics is vast and widening? That’s a tough topic. But kicking people off YouTube and making sure members of Conservatism Inc. stick their heads in the sand will not help us find viable solutions. Sustainable compassion is possible only when the truth is embraced, not suppressed.

And the libertarian mega-donors who nurture a network of pundits and scholars who produce a torrent of “paid-for ideas” should ask themselves: Do we really want to embitter hard-working American patriots like Vincent James, who proudly carry the legacy of generations who struggled to build this nation, and are determined to do everything they can to preserve it?