President Trump’s furious admonition to four extreme leftist members of Congress to educate themselves in the miseries of their ancestral homelands was met with spiteful indignation. In the media version, innocent ingenues defended their honor and their rights against a predatory, racist president.

In truth this fight is about American nationalism or patriotism versus Third World nationalism or identity politics. In brief remarks at the recent conference on National Conservatism, I asserted that a key book for understanding the issue of identity politics is The Rediscovery of America: Essays by Harry V Jaffa on the New Birth of Politics, which I co-edited with Edward J. Erler. In the words of a recent, insightful book about the late Claremont Institute political philosopher, Steven Hayward argues that Jaffa’s conservative worldview might be summarized as “patriotism is not enough.”

But that necessary condition for successful politics—patriotism—requires in addition the sufficient condition for national greatness, the most interesting part of Jaffa’s thought, that America was founded as the best possible political order, as foreshadowed in the Declaration of Independence. As Erler puts it, “Jaffa never tired of repeating, the theology of the Declaration was one of reason and revelation.”

But Jaffa was not advocating blind worship of anything. The centrality of the inquisitiveness of both philosophy and religion as key elements of this sufficient condition are presented in a thoughtful review of Rediscovery of America by David Tucker, a Jaffa student and a colleague of mine at Ashland University’s Ashbrook Center. His argument about Jaffa both complements and clashes with Erler’s and mine and is, with David Bahr’s review, a welcome addition to figuring out both the major themes and subtleties of Jaffa’s teaching.

For Tucker, the question to ask about this extraordinary thinker is “Why did Harry Jaffa change his mind?” This is no splenetic academic food-fight. At stake is how we understand our patriotism and our nationalism, and our minds and hearts.

Here’s the problem: Jaffa’s earlier book on Lincoln, Crisis of the House Divided: An Interpretation of the Lincoln-Douglas Debates (1959) was hailed by leading Civil War historians and political theorists as a dazzling achievement of scholarship and analysis. This was followed, over 40 years later, by the long-promised A New Birth of Freedom: Abraham Lincoln and the Coming of the Civil War, a book that was hailed by many scholars but with less enthusiasm than the first one.

Tucker summarizes the gap between the two books: Jaffa’s earlier Lincoln “gave the nation a new birth of freedom by creatively interpreting the claim that all men are created equal as a noble, transcendent idea of justice . . . . Whereas Crisis presented Lincoln as overcoming Jefferson, New Birth presented Lincoln as Jefferson’s greatest student.” The “transcendent morality” and, in Lincoln’s words, “sacred principle” of the Declaration of Independence made free self-government possible. The great strength of Tucker’s review is his clear explanation of this change in Jaffa’s thinking. I will, however, emphasize certain points.

In Jaffa’s later view, Lincoln was not fighting Jefferson’s modernity—that is, his political reliance on low self-interest—but rather he was preserving the “noble, transcendent,” original understanding of Jefferson and the other founders.

Here I need to dissent from Tucker’s further characterization of our collection. Contrary to what Jaffa himself wrote, Tucker argues that his last book, Crisis of the Strauss Divided: Essays on Leo Strauss and Straussianism, East and West “provides his own explanation” of his change. This book of quirky and self-referential title emphasizes the theme of reason and revelation in the thought of his teacher Leo Strauss and Jaffa’s disputes with other students of Strauss. Along with his other two books it is indispensable for understanding Jaffa. In brief, Jaffa wanted to prevent the American Founding from being mischaracterized as an anticipation of radical modernity—Madison giving way to Rousseau, Franklin to Nietzsche, and so on. Whatever shortcomings some of their abstract arguments may have had, their superior prudence or political judgment makes them our heroes today.

Jaffa’s observation from the first essay in Rediscovery shows how he dealt with Tucker’s objection: “That the Founding, which Lincoln inherited, was dominated by an Aristotelian Locke—or a Lockean Aristotle—has been a conspicuous theme of my writing since 1987.”

Our book includes major Jaffa essays that focus on this “conspicuous theme.” The Declaration itself speaks of “‘Safety and happiness,’ the alpha and omega of political life in Aristotle’s Politics.” Happiness was not some happy hour of pleasure but the pursuit of virtue. The American founding, in essence, was Aristotelian, not Hobbesian or “modern.” Its aims were those of the classical best regime and, moreover, took into account the radical change brought about by Christianity.

Thus, “Law for an ancient city and for a modern state . . . must of necessity be very different. It must be very different as to the ways and means by which it is formed, yet altogether the same for the human ends it must serve.” The prevention of tyranny (and the preservation of freedom) required recognition of the change from the gods of the ancient city to Christian monotheism: “Each individual is a citizen, actual or potential, of the City of God, before being a citizen of his own particular country.” 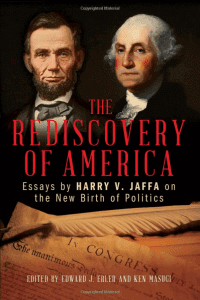 Oddly, Tucker finds an anti-Jefferson spirit in even the cover of the book “which features the faces of Lincoln and Washington” but also, he neglects to mention, the beginning of the Declaration, which is central and foundational. Americans, after all, are right to embrace Jefferson’s Declaration while at the same time being more selective about some of his modern philosophical tendencies, on display in his Notes on the State of Virginia, subject of a careful exposition by Tucker.

Jaffa could argue, Tucker summarizes, that “America was the best regime because for the first time in western civilization a political order did equal justice to the ‘two irrefutable and irreducible principles of human life,’ reason and revelation,” philosophy and biblical religion. Tucker’s own description rings true: “When he wrote Crisis, he was under the spell of his great books education acquired with Strauss but had not studied politics enough . . . . Jaffa thus escaped the Strauss school, while others did not. This explains Jaffa’s criticism of mere book learning and his remark to [Harvey] Mansfield that he (Mansfield) had to attend to political thought not just the history of philosophy.” Here, Tucker refers to a previously unpublished exchange in 1996 between Jaffa and Harvard’s Harvey Mansfield, a 120-page section titled “The Decline and Fall of the American Idea: Reflections on the Failure of American Conservatism.”

This failure could be seen in the political trajectory of what initially appeared to be an affirmation of Jaffa’s early Crisis of the House Divided argument for equality in the civil rights revolution.

The Civil Rights Movement’s plea for equality of rights soon turned against its natural rights foundation. And it became clear that the feminism that appropriated the civil rights revolution overthrew the authority of the Declaration, in the following way: “if public opinion no longer held that gender (sic) differences were natural, then it could no longer hold that any distinctions were natural.” This also explains why “Jaffa stoutly resisted such arguments [e.g., “for the acceptance of homosexuality”], referring to homosexuals as sodomites.” Thus, he saw that a moral revolution he initially favored and advanced as an affirmation of “equality” actually rejected equality as the foundation for political legitimacy and instead came to undermine “the authority of both reason and revelation, eroding the ground of civic friendship.”

This realization explains why Jaffa came to treat old friends and benefactors as enemies. In New Birth of Freedom, the opponents are conservative thinkers and jurists, not only the liberal historian villains of Crisis of the House Divided. Tucker incisively explains:

Jaffa came to see that Strauss’s thinking was turning into a school. This meant that political philosophy, rediscovered by Strauss, might disappear again. To preserve both the country and political philosophy, Jaffa returned to the beginning, reinterpreting the founding to emphasize its Biblical but, he now argued, no less rational morality.

Jaffa’s great purposes were patriotic, philosophic, and pious—he wanted it all. He wanted to be a good human being, which meant he also had to be a good citizen in the best regime, even as its founder in speech. He was a true friend of America, offering it unity in the bonds of mutual affection for the highest purposes.