On Thursday, a gaggle of civil servants protested the proposed relocation of a couple of Agriculture Department bureaus from Washington, D.C. to Kansas City, Missouri by boldly turning their backs on a speech delivered by Agriculture Secretary Sonny Perdue.

Perdue announced that the Economic Research Service, which provides research and statistical analysis for lawmakers, and the National Institute of Food and Agriculture, which allocates federal research funding, would be moving most of their personnel and operations by the end of September.

These employees have had a year either to make peace or make plans, but instead, they decided to wait until the final announcement to purse their lips, cross their arms, and stare off into space.

Clearly, the USDA has been violating child labor laws by hiring toddlers. Watch CNN’s reporting of the incident: 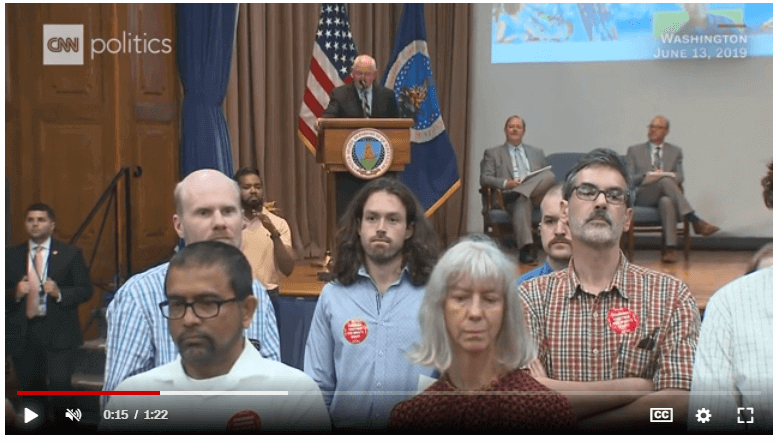 The long-haired guy in the middle is holding his breath until he matches his shirt color, and the man in the plaid shirt to his right looks like he’s auditioning for the Actor’s Studio. The bald fellow to the left doesn’t look entirely committed to the cause.

You would think Perdue is exiling these people to a remote outpost in Greenland. It may come as a surprise for these protesters to discover that, according to the latest U.S. Census figures, literally millions of people voluntarily live in the Kansas City metropolitan area. The place has NFL football, major and minor league baseball, and plenty of museums only slightly inferior to the Smithsonian that Washingtonians only visit when relatives are in town anyway.

We all know Washington, D.C. has grown into a world-class city in the past few decades, driven by a massive infusion of federal dollars (particularly during the Obama administration, when the D.C.-Northern Virginia region became one of the most expensive metropolitan areas in America). It’s almost always unpleasant to be told that to keep your job you have to move, but one can see that it might be particularly unpleasant for those used to such neighborhood amenities.

But if they really knew what was good for them, they’d jump at the chance. Yes, the General Schedule pay scale in Kansas City is about 10 percent lower than in D.C., but the cost of living is about 25 percent less, and according to Zillow, housing prices are 75 percent lower than the national average. Given the run-up in D.C. housing prices since 2012, many of these people would  be able to buy new homes in cash. (Then again, maybe having the invading overlords live in the best houses in town may just feed the resentment. Whether that’s a feature or a bug depends on your point of view.)

In fact, the proposed relocation of federal agencies to the Western and Midwestern United States is one of the most innovative things to come out of the Trump Administration. They hope that bureaucracies, if they must exist, will do a better job if they are located among the people they regulate, rather than within the Beltway bubble.

In the case of the ERS and NIFA, they’ll be moving to within a couple hundred miles of six major land-grant universities that graduate plenty of students well-qualified for these positions. Surprisingly, many of them would rather stay in the Midwest than move to the nation’s capital.

In the run-up to Perdue’s announcement last week, congressional Democrats orchestrated some hearings, bringing in farmers and researchers who claimed that the move would make things more difficult rather than easier. They argued, inter alia, that travel would be more difficult from Indiana to Kansas City than to D.C., and that the move would make it hard to coordinate with other government agencies working on related subjects.

Both of those are beside the point. It’s not necessarily how easy it is for a farmer to get to D.C. that matters; very few will make that trip. It’s how easy it is for the bureaucrats to get to the farmers, and in Kansas City, they’ll be only a few minutes’ drive from the fruited plain itself. In this case, going native isn’t an unpleasant byproduct, it’s the point. In those interagency meetings, maybe one of those agencies will see itself as representing the farmers and ranchers whose lives the government is trying to run.

Despite all the claims of loss of efficiency and having to move to a place with decent barbecue and jazz, it’s hard to escape the belief that what they’re really afraid of is a loss of status, which is Washington’s real currency. I lived in the Beltway region for 25 years, and the best movie to understand the place is a 1996 French offering, “Ridicule,” about Versailles.

Instead, they’ll be moving to a place where people don’t open conversations with GS-level butt-sniffing.

If all this sounds condescending to D.C. bureaucrats, they should try to imagine how far-away bureaucrats sound to the rest of us.