If the “smart growth” urban planners that dictate land use policies in Democratic states and cities have their way, the single family dwelling is an endangered species.

In Oregon, proposed legislation would “require cities larger than 10,000 people to allow up to four homes to be built on land currently zoned exclusively for single-family housing.” In Minneapolis, recent actions by the city council mean that “duplexes and triplexes would be allowed in neighborhoods that only previously allowed single-family housing.”

In California, ground zero for this movement, state legislation now requires cities and counties to fast track permitting for “accessory dwelling units.” This scheme will allow developers and ambitious homeowners to construct detached rental homes in their backyards, but since they’re called “accessory dwelling units,” instead of “homes,” they would not run afoul of local zoning ordinances that, at one time, were designed to protect neighborhoods from exactly this sort of thing.

“Smart growth,” however, began long before the home itself came under attack.

First there was the war on the back yard. Large lots became crimes against the planet—and if you doubt the success of this war, just get a window seat the next time you fly into any major American city. In the suburbs you will see a beautiful expanse of green, spacious, shady neighborhoods with lots designed to accommodate children playing, maybe a pool or vegetable garden, big enough for the dog.

But you will also see, plain and obvious, those suburbs that were built after the smart growth crowd came along. Tight, treeless, and grey, with homes packed against each other, these are the Green Bantustans, and there’s nothing green about them.

The image below shows homes packed roughly 15 per acre—including the streets—on private lots that are 40-feet wide by 80-feet deep. As of January, these homes were selling for $350,000. Such a deal! Smart growth! 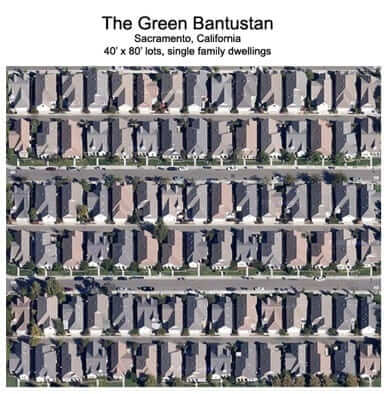 Why call neighborhoods with mandated ultra-high density “Green Bantustans”? Because the Bantustan was where a racist elite used to herd the African masses during South Africa’s apartheid era. The commonality between the Green Bantustan and the Racist Bantustan becomes clear when you step back and ponder what is happening. In both cases, a privileged elite condemn the vast majority of individuals to live in a concentrated area designed to minimize their impact on the land.

The image below is fascinating, because at the same scale, it shows a neighborhood in the township of Soweto, once touted as a poster child for one of the most chilling warehouses for human beings in history. But notice the size of the lots—40 feet by 80 feet—are identical in size to that Green Bantustan in California. Also, please note, it’s probably much easier to get a building permit in Soweto. 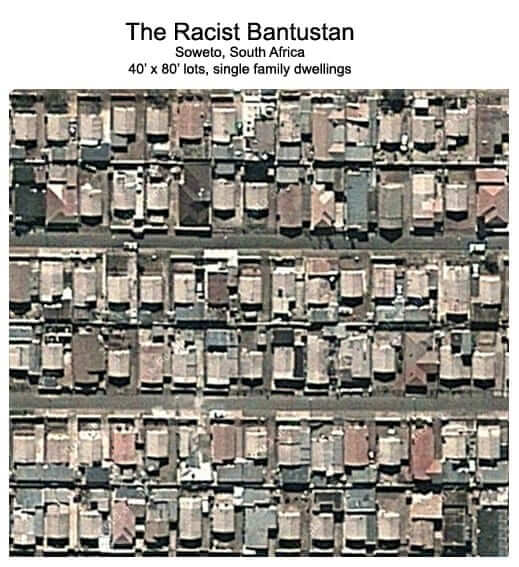 In the name of “smart growth,” urban planners have succeeded in creating policy that has drawn lines around American cities, “urban service boundaries,” which make it nearly impossible to start new home construction outside these lines. While the purpose of these boundaries ostensibly is to protect open space, farmland, and wilderness habitat, not only are those goals only marginally fulfilled, but other negative unintended consequences abound. Consider the following:

Urbanization just takes a different form. Creating these greenbelts of protected open space mean instead of leapfrog development, you have super-leapfrog development. People who want to get out of the city now build and purchase homes on the other side of the greenbelt. Instead of suburbs on the perimeter of cities, you have exurbs, whole new cities, constructed just beyond the protected areas.

Quality of life is ruined in older suburbs. Homes within these cities are concentrated onto tiny lots in order to get as many people into each new development as possible. Often these new developments are imposed in the middle of semi-rural suburbs where the way of life for the people already living there is destroyed.

Traffic congestion gets worse. These dense new neighborhoods are designed to be “pedestrian friendly,” but what they really are is car unfriendly. There is no room to park, inadequate roads, and expensive light rail that most people can’t make practical use of.

Housing becomes unaffordable. The winners in “smart growth” are never people who need affordable homes, because prices always go up when you reduce the supply of developable land. The winners are those landowners lucky enough to have property within the arbitrary boundaries where growth is permitted, and the public sector bureaucrats who keep development within their jurisdictions, in order to collect property taxes and fees on artificially inflated home values.

Basic Facts Contradict the Arguments for “Smart Growth”
If the proportion of land consumed by people, even in low density suburbs, is compared to the amount of land available for development, the case for high-density “smart growth” weakens. For example, even with nearly 40 million residents, California is a sprawling, relatively unpopulated state where harsh restrictions on land development are unnecessary. 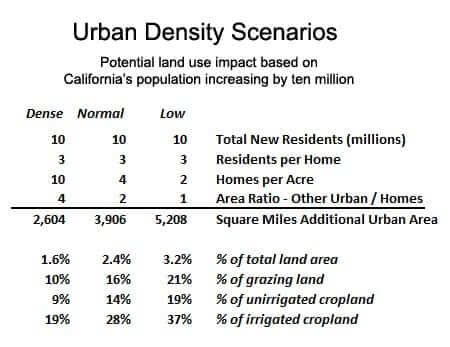 The above chart depicts three urban growth scenarios, all of them assuming California experiences a net population increase of 10 million, and that all new residents on average live three people to a household (the current average in California is 2.96 occupants per household). For each scenario, the additional square miles of urban land are calculated.

As the chart shows, adding 10 million new residents under the “low” density scenario would only use up 3.2 percent of California’s land. If all the growth were concentrated onto grazing land—much which is being taken out of production anyway, it would only consume 21 percent of it. If all the growth were to fall onto non-irrigated cropland, which is not prime agricultural land, it would only use up 19 percent of that. Much growth, of course, could be in the 58 percent of California not used either for farming or ranching.

Two key points about these data bear emphasis. First, there is plenty of room for low-density development for millions of new residents, not only in California, but elsewhere in the United States. As shown in this example, moving 10 million people into homes on half acre lots, with no infill within existing urban areas, would only consume a small fraction California’s land area.

Second, even the dense scenario depicted on the first column the chart, cramming ten homes onto each developed acre, is not acceptable to the smart growth crowd. The policy goal in California, and elsewhere as noted, is to channel as much new development as possible into the confines of existing cities, and overwhelmingly favor multi-family dwellings over single-family detached homes.

“Smart Growth” is Not Smart, It’s Just Cruel
None of this is necessary. The idea that American policymakers should enforce urban containment is a cruel, entirely unfounded, self-serving lie.

The lie remains intact no matter the context. If there is an energy shortage, then develop California’s shale reserves. If fracking shale is unacceptable, then use safe land-based slant drilling rigs to tap natural gas in the Santa Barbara channel. If all fossil fuel is unacceptable, then build nuclear power stations in the geologically stable areas in California’s interior. If there is a water shortage, then build high dams. If high dams are forbidden, then develop aquifer storage to collect runoff. Or desalinate seawater along the Southern California coast. Or recycle sewage. Or let rice farmers sell their allotments to urban customers. There are answers to every question.

Environmentalists generate an avalanche of studies, however, that in effect demonize all development, everywhere. The values of environmentalism are important, but if it weren’t for the trillions to be made by trial lawyers, academic careerists, government bureaucrats and their government-union overlords, crony green capitalist oligarchs, and government pension-fund managers and their partners in the hedge funds whose portfolio asset appreciation depends on artificially elevated prices, environmentalist values would be balanced against human values.

The Californians who are hurt by urban containment are not the wealthy people who find it comforting to believe and lucrative to propagate the enabling big lie. The victims are the underprivileged, the immigrants, the minority communities, retirees who collect Social Security, low wage earners, and the ever-shrinking middle class.

In America, it used to be that refugees from California who aspired to improve their circumstances could move to somewhere like Houston and buy a home with relative ease. Watch out. That is changing. The masses are being herded into Green Bantustans, as America turns into a petri dish for the privileged upper class, backed up by a fanatical Earth First movement.