Thomas Malthus was an English cleric and scholar living in the early 19th century who developed the theory that global population increases exponentially, while global production increases arithmetically. His theory—and the eventual collapse of civilization that it implies—enjoys influence to this day. In California, it found early expression in a 1976 speech by Governor Jerry Brown, who announced that we had entered an “era of limits.” For more than 40 years now, influential politicians such as Brown, supported by like-minded environmentalists, have embraced the Malthusian vision. But an alternative exists. 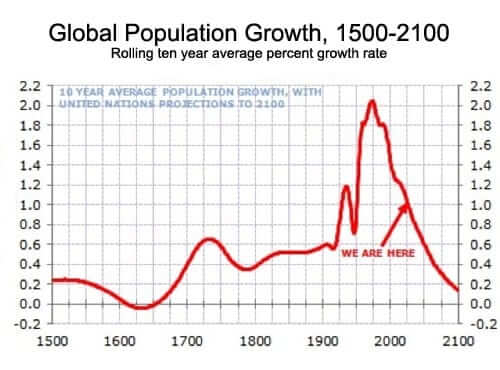 At the same time that the rate of global population growth is slowing significantly, global productivity continues to increase. Virtually all recent estimates—World Bank, International Monetary Fund, United Nations—forecast global GDP growth to exceed 3 percent per year into the foreseeable future. This rate of growth is low by historical standards and, notwithstanding temporary disruptions caused by future recessions, is likely to be much higher over the next several decades. Put another way, the rate of global wealth creation currently exceeds the rate of human population increase by at least 50 percent, and that ratio is likely to improve over the long-term.

Enough Resources to Sustain Global Economic Growth?
By now, most Malthusians have to acknowledge that global population is leveling off, but they will nonetheless assert that too many people are already here, and there simply aren’t enough resources left on Planet Earth to fuel long-term economic growth. But the prevailing challenge facing humanity when confronted with resource constraints is not that we are running out of resources, but how we will adapt and create new and better solutions to meet the needs that currently are being met by what are arguably scarce or finite resources. If one accepts this premise, that we are not threatened by diminishing resources, but rather by the possibility that we won’t successfully adapt and innovate to create new resources, a completely different perspective on resource scarcity and resource management may emerge.

Across every fundamental area of human needs, history demonstrates that as technology and freedom are advanced, new solutions evolve to meet them. Despite tragic setbacks of war or famine that provide examples to contradict this optimistic claim, overall the lifestyle of the average human being has inexorably improved across the centuries. While it is easy to examine specific consumption patterns today and suggest we now face a tipping point wherein shortages of key resources will overwhelm us, if one examines key resources one at a time, there is a strong argument that such a catastrophe, if it does occur, will be the result of war, corruption, or misguided adherence to counterproductive ideologies, and not because there were not solutions readily available through human creativity and advancing technology.

Energy, water, and land are, broadly speaking, the three resources one certainly might argue are finite and scrupulously must be managed. But in each case, a careful examination provides ample evidence to contradict this claim.

Abundant Energy: According to the most recent BP Statistical Review of World Energy, proven reserves of fossil fuel could provide enough energy to serve 100 percent of worldwide energy requirements at a total annual rate of consumption twice what is currently consumed for at least another 367 years. That is based on adding together the known reserves of the three primary fossil fuels. Using natural gas exclusively, 27 years; oil, 90 years; coal, 250 years. Moreover, additional reserves of fossil fuel are being discovered faster than fossil fuel is being depleted. And this abundance of available fossil fuel is estimated without accounting for vast deposits of so-called unconventional reserves such as methane hydrates.

In addition to fossil fuel, there are proven sources of energy such as nuclear and hydroelectric power, and new sources of energy including wind, solar, geothermal, and biomass, that have the potential to scale up to provide comparable levels of power production. And then there is the eventual promise of limitless, clean fusion power, and perhaps other sources of energy we can’t yet imagine. With these many energy alternatives, combined with relentless improvements in energy efficiency, it is difficult to imagine human civilization ever running out of energy.

Abundant Water: In many regions of the world, the challenge of meeting projected water needs appears more daunting than the challenge of producing adequate energy. But fresh water is not a finite resource. There are countless areas throughout the world where desalination technology can provide water in large quantities—in 2017 over 24 billion cubic meters of the world’s fresh water was obtained through desalination, an amount equivalent to 5 percent of all urban water use worldwide in that year. For large urban users, desalination is affordable and requires surprisingly little energy input.

Another way to provide abundant water is to redirect large quantities of river water via inter-basin transfers from water-rich areas to water poor areas. Finally, water is never truly used up, it is continuously recycled, and by treating and reusing water, particularly in urban areas, there should never be water scarcity.

With water, as with energy, innovation is providing solutions heretofore unimaginable. Densely populated urban areas around the world are turning to high-rise agriculture, where food is grown indoors using water that is perpetually recycled, fertilizer from waste streams, with zero need for pesticides.

Abundant Land: The question of finding adequate land for humans is clearly different from that of finding energy or water, since unlike energy or water, land is truly finite. But even here, key trends indicate land is now becoming more abundant, not less abundant. This is because for decades, all over the world, people have been migrating into densely populated cities. Using World Bank data, as summarized on the bar chart, the global rural population (red) has slowly increased from 2 billion in 1960 to an estimated 3.4 billion in 2020. By 2050, the rural population worldwide is actually expected to decrease, back down to 3.1 billion.

Meanwhile, the global urban population has accommodated nearly all population growth over the past sixty years. These urban populations are concentrated in megacities that, while vast, consume a small fraction of land area on earth. In 1960, humanity’s 1 billion urban dwellers constituted only 34 percent of the global population. By 2050, an estimated 6.6 billion people will live in cities, comprising 68 percent of all humanity. Moreover, this transition has been voluntary. Most people apparently prefer the amenities and opportunities of urban life. 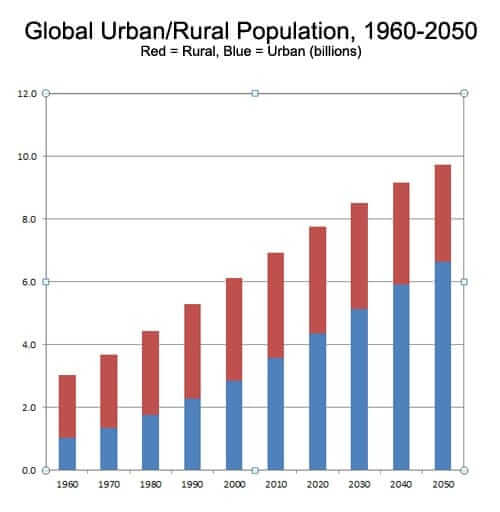 This massive voluntary migration to cities from rural areas, combined with new agricultural innovations, is depopulating landscapes faster than what remains of human population growth will fill them. This seismic shift in the distribution of humans on earth, combined with new high yield crops, aquaculture, and urban high-rise agriculture, promises a decisive and very positive shift from land scarcity to land abundance in the next 25-50 years.

The Ideology of Abundance vs. the Ideology of Scarcity
If one accepts the possibility that humanity is not on a collision course with resource scarcity, entirely new ways of looking at policy options are revealed. Rather than attempting to manage demand, based on the premise that supplies are finite, we might also manage supply by increasing production. While, for example, utility pricing might still be somewhat progressive, if we assume resources will not run out, it doesn’t have to be punitive. If someone wishes to use more energy or water than their neighbor, if their pricing isn’t so punitive as to effectively ration their consumption, but instead is only moderately progressive, then overconsumption leads to higher profit margins at the utility, which in-turn finances more investment in supplies.

Another consequence of rejecting the Malthusian conventional wisdom is a new understanding of what may truly motivate many powerful backers of the doomsday lobby. By limiting consumption through claiming resources are perilously scarce and by extracting them we may destroy the earth, the vested interests who control the means of production will tighten their grip on those means.

Instead of pluralistically investing in this last great leap forward to build megacities and infrastructure for the future—in the process extracting raw materials that either can be recycled or are renewable—the public entities and powerful corporations who benefit from scarcity will raise prices and defer investment. It is the interests of the emergent classes, whether they are entrepreneurs in prosperous, advanced economies, or the aspiring masses in developing nations, which are harmed the most by the Malthusian notion of inevitable scarcity.

Abundance is a choice, and it is a choice the privileged elite must make—in order for humanity to achieve abundance, elites must accept the competition of disruptive technologies, the competition of emerging nations, and a vision of environmentalism that embraces resource development and rejects self-serving anti-growth alarmist extremism. The irony of our time is that the policies of socialism and extreme environmentalism do more harm than good both to ordinary people and the environment, while enabling wealthy elites to perpetuate their position of privilege at the same time as they embrace the comforting but false ideology of scarcity.