Jerry Brown was governor of California for 16 years. His four terms, two that ran from 1975 through 1982, then two more that ran for the past eight years, bookended California’s transition from a sprawling and remote, sun-splashed coastal paradise, defined by Hollywood, the counterculture, and a rising technology industry, to an economic leviathan, the global epicenter of technological innovation, and cultural evolution.

So much has changed. California now boasts the fifth-largest economy on earth. California’s high-tech companies—Apple, Facebook, Google, and countless others—are defining how we will live in the coming decades. In nearly every significant area of politics, culture, and technology, Californians are global leaders.

California’s politics are also unique, insofar as no other state in the union is so absolutely under the control of Democrats. Every major state officeholder is a Democrat. Both houses of California’s state legislature are controlled by Democratic supermajorities. California’s congressional delegation, which at 53 is by far the largest in the U.S. House of Representatives, consists of 46 Democrats and only seven Republicans. California’s senators, the venerable Dianne Feinstein, and the ascendant Kamala Harris, are both staunch Democrats. And all of these Democrats proudly consider California to be ground zero for the anti-Trump “#Resistance.”

And so, on January 7, the Brown era came to an end, and a new governor took office: Gavin Newsom. Elected easily, the former lieutenant governor (and before that, mayor of San Francisco) ran on the slogan “courage for change.” Newsom’s inauguration speech didn’t disappoint. Change was indeed the message, consistent with the policy agenda he’d campaigned on—universal preschool, a guarantee of free community college, and universal, single-payer health care (including for noncitizens).

And to pay for all this? No problem. California is an economic juggernaut. California’s current budget surplus could be as high as $15 billion. California’s future’s so bright, you’ve gotta wear shades.

Except that it is not all that bright. California faces dangerous economic challenges likely to converge into a perfect storm, with devastating consequences. Here are a few things that Gavin Newsom in particular, and California’s Democrats in general, may wish to consider before they take their great leaps forward.

This comparison between 2010 and 2017 should serve as a cautionary example to anyone considering expanding California’s state spending. Because nearly the entire increase in California’s revenue between the economic trough of 2010 and the current economic peak was the result of wealthy people paying enormous taxes on one-percenter levels of income and capital gains. 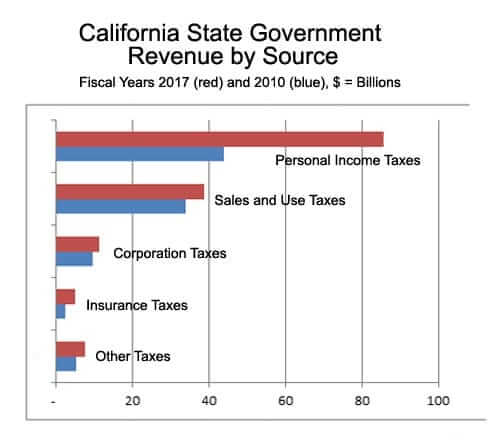 The Super Rich Pay Most of the Taxes Collected in California
If that fact isn’t yet obvious, here’s another chart derived from California’s June 2017 CAFR, showing how much income tax was paid according to the tax bracket of the taxpayer. This uses data for the fiscal year ended June 30, 2015, which was the best available data at the time. It’s a fair bet the disparities depicted on the chart have widened even more, since investment appreciation in the two years through June 2017 were extraordinary.

As shown, of the $71 billion in personal income tax collected in the fiscal year ended June 30, 2015, $28 billion, or 40 percent, was paid by only 70,437 individual filers. The vast majority of Californians, those declaring under $100,000 in income, contributed only $7.5 billion, just over 10 percent of total collections, even though they represented 81 percent of California’s taxpayers. 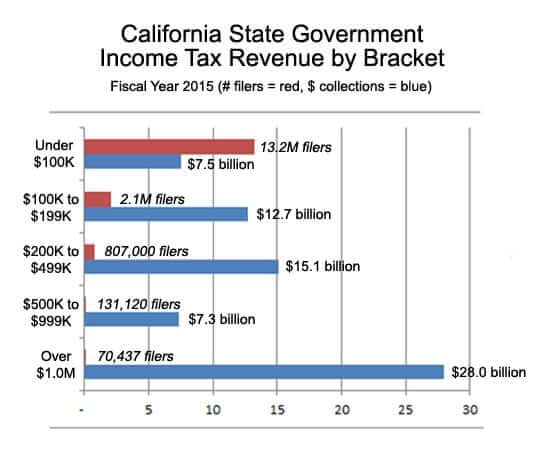 The cold fact California’s new governor must confront is that extremely rich people, paying the highest rates of state income tax in the United States, are the only reason the state has any surplus at all.

Personal income tax collections in California nearly doubled between 2010 and 2017. The reason for that wasn’t because people making under $100,000 were earning less and paying less in income taxes—they were, but those residents only contribute 10 percent of California’s income tax revenue, even though they are more than 80 percent of all taxpayers.

So what happens when rich people start paying less in taxes, because investment returns stop being extraordinary?

Apparently, Gavin Newsom thinks they can.

Clouds Darkening the Golden State’s Future
California’s optimists may wish to take off their sunglasses, at least for a while, because economic storm clouds are on the horizon. More evidence that the tech stock and housing bubbles are deflating comes from Joel Kotkin, who in a recent column enumerated the factors driving values back down; slowing foreign investment that for years has helped propel California’s real estate values upwards, state GDP growth, tech sector expansion, and job creation falling behind other states, sky-high rents driving workers out, and “declining infrastructure, absurd housing prices, massive poverty, and the embarrassing budget-busting high-speed choo-choo.”

California’s state tax revenues are inordinately dependent on wealthy filers making a lot of money, which makes those revenues inordinately vulnerable to another economic downturn. But when the asset bubble pops, not only will revenues go down. Expenses will go up. Way up.

California’s Profound Weaknesses Demand Caution
If the overall value of tech stocks and real estate plateau, much less decline, California’s state tax revenue immediately would drop by at least $10 billion per year, and the contributions they are required to make to their government worker pension systems would go up by at least $10 billion per year. This would wipe out any possible budget surpluses. And yet these programs, universal preschool, a guarantee of free community college, universal health care (including for noncitizens) and single-payer healthcare, come with staggering annual costs. To implement all of them likely would cost several hundred billion dollars per year. Where on earth will California get that money?

Barry Ritholtz, writing for Bloomberg in October, touted the accomplishments of California’s economy in comparison to the economy in Kansas—which he derisively held up as President Trump’s ideal policy environment. He decried Trump’s allegedly dystopian policies, claiming they would lead to the “Kansasification” of America.

But Ritholtz ignores California’s dependence on unsustainable asset appreciation to sustain its government budgets and its pension funds. He ignores the Golden State’s wealth inequality, the high rate of poverty, the even higher cost of living, the punitive regulations. He ignores the arrogance of the climate fundamentalists and open-borders fanatics, who are apparently unaware that when you can’t build anything at a reasonable cost (thanks to regulations inspired by the need for “climate change mitigation”), you might not want to invite the entire world’s huddled masses in for a permanent visit.

Gavin Newsom, egged on by leftist oligarchs, public sector unions, extreme environmentalists, opportunistic trial lawyers, the high tech, media, and entertainment communities, and the identity politics industry, is galloping exuberantly toward their common utopian vision: the Californiafication of America. With any luck, Newsom will take off his sunglasses, notwithstanding the lovely, lingering bright California sun, and looking to the horizon, avoid the abyss obscured by clouds.

Editor’s note: The subheading in the second graph depicting income tax revenue by bracket has been corrected.