After the unexpected election of President Donald Trump, something else unexpected happened. The stock market soared.

Since then, however, the Dow, along with the other major U.S. indexes, have been tumbling. By Christmas Eve, the Dow was 19 percent off its high, down to 21,792. What had been called the “Trump Bump” is now being called the “Trump Slump.”

While President Trump has been criticized for taking credit for the stock market rise, Barack Obama also got into that action, claiming in October 2018 that “the booming started on his watch.” But today’s economy, and especially the stock market, are reacting to longer-term trends for which neither president deserves full credit or blame.

Depicted on the chart below is the performance of the Dow from 1995 when the markets began first showing signs of “irrational exuberance,” to the extremely exuberant present day. On clear display are the past two bubbles, the internet bubble of 2000, the housing bubble of 2007, and what we may call the “super bubble” or “everything bubble” of 2018. 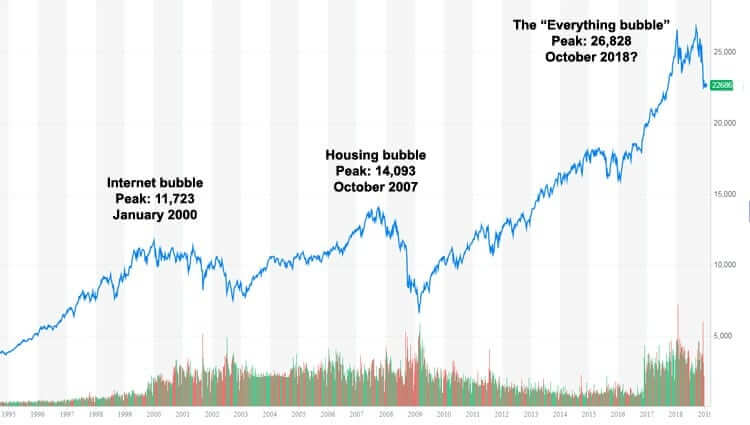 It doesn’t take an economist to notice a pattern. The Dow, which tracks closely with all publicly traded equities in the United States, more than doubled in the four-year heady runup to its January 2000 peak, then went into decline for nearly four years, before doubling again between 2004 and 2007. Then, when the housing bubble popped, the Dow went off a cliff, dropping to half its 2007 peak in a little over a year. In past 10 years, the Dow has exploded again, tripling to a high of 26,828 in October. What now? Visually, at least, another correction appears logical.

There are all kinds of economic reasons why what is visually indicated on the above graph should happen. At best, we may hope for stocks to correct but not crash, which is sort of what happened after the internet bubble popped. But what’s different this time?

One key difference this time around is that dramatically lowering interest rates is not an option. In January 2000, the Federal Funds Rate was 5.5 percent. By June 2003, it had dropped to 1 percent. When interest rates drop, stocks become relatively better investments than fixed-rate investments. Lower interest rates also induce more people to borrow, creating liquidity, stimulating consumer spending, which helps corporate earnings which drive up stock prices. The cause and effect is reflected in the stock market history—by 2003, after lowering interest rates by 4.5 percent, the stock market finally began to recover.

In October 2006, the rate had risen to 5.25 percent. In September 2007, as home sales were starting to drop, it was lowered to 4.75 percent. When the housing bubble popped, and the stock market crashed, the Federal Reserve responded by steadily lowering the Federal Funds Rate. By December 2016, it had dropped to 0.25 percent, the lowest rate possible.

What should be of concern, is that the rate today, 2.5 percent, is only half as high as it was during the past peaks. During the previous two bull markets, the Federal Reserve was able to bounce the rate up to around 5 percent before the bears came calling. This time, assuming we’ve hit the peak, only half that increase, to 2.5 percent, was achievable.

A consequence of low interest rates is more borrowing, which can be a good thing if that borrowing stimulates economic growth that translates into investments in productivity. But today, borrowing has not been used to stimulate productive investments. Instead, much of the corporate borrowing over the past decade has been used to finance stock buy-backs. This is a dangerous strategy, causing short-term growth in earnings per share, but loading debt onto corporate balance sheets that will have to be refinanced at increasingly high interest rates, at the same time as investment in research and modernizing plants and equipment has been neglected.

In recent years, federal, state, and local governments have also over-borrowed. Federal borrowing accelerated in mid-2008 and hasn’t slowed since—climbing to more than $21 trillion by the third quarter of 2018. As interest rates rise, servicing this debt will become far more difficult. Meanwhile, all U.S. credit market debt—government, corporate, and consumer—has continued to increase. After dipping slightly to $54 trillion in the wake of the burst housing bubble, it was up to a new high of $68 trillion by the end of 2017.

When interest rates fall, not only is the stock market stimulated. Bonds make payments at fixed rates, so when the market rate drops, the price of these bonds increases, since they can be sold for whatever price will give the buyer the same return as the current market rate. Interest rate reductions also cause housing prices to rise, since when interest rates are low, people can afford bigger mortgages as they make lower monthly payments. The opposite is also true, which is unfortunate for investors. All else held equal, rising interest rates means lower prices for bonds and housing.

If the super bubble pops and crashes this time, all assets—equities, bonds, and real estate—will drop in value. Even if extraordinary measures are taken to stop the decline—such as the fed purchasing corporate bonds—there will be nowhere to run.

Unwinding the debt accumulated during a credit binge lasting decades will impact all sectors of the economy. In the short run, federal budget deficits are structurally impossible to eliminate. But what can be changed is how the money is being spent. Here, the policies of President Trump reflect a canny awareness of costs and benefits. For example:

The United States has significant economic advantages that Trump, unlike his predecessors, is using to benefit ordinary Americans, and it’s about time. America can engage in the tactics just described because the American currency remains unchallenged as both the global reserve currency and the global transaction currency. As long as America’s economy is healthier (or less afflicted) than other major national economies, America’s currency will remain strong even as the U.S. Treasury continues to issue hundreds of billions in new T-Bills to cover deficits.

The only currencies that might challenge the U.S. dollar are those of China or the European Union, but these economies face debt overhangs as severe as America’s. And unlike the United States, China and the EU confront an array of challenges, including an aging population, less diverse economies, fewer domestic supplies of energy, less agricultural capacity, less internal stability, and less military power. Until there is a serious competitor to the U.S. dollar, Americans have time to get their federal budget deficits under control.

When Trump called attention to the soaring stock market and raved about increasing economic growth, he was doing what a president should do—be America’s greatest cheerleader. But the reality is that Trump has inherited an economy that survived the subprime mortgage crisis of 2007 by even more borrowing. It is an economy in which stock values rose because corporations took advantage of low interest rates to borrow cash to buy-back their own stock; an economy where consumers resumed borrowing to buy cheap imported goods and pay punitively overpriced tuition to send their children to college; an economy where infrastructure spending and strategic military investments were deferred in order to fund more domestic entitlements and fight endless police actions overseas.

A correction to the stock market is inevitable. The relentlessly hostile political and media establishment will blame the correction on Trump. But Trump’s economic policies are appropriate for the times in which we live. They are designed to restore America’s strength and security, and to minimize the degree to which the problems on Wall Street spread to Main Street.