If there’s one thing about Donald Trump all right-thinking folks can wholeheartedly celebrate, it’s the way he’s made the masks slip on so many alleged conservatives. First to go were the #NeverTrumpumpkins (no names, please!), as their magazines foundered and their reputations declined along with the quality of their shticks. Also out the door are many, if not most, of the “neocons” (Max Boot, Jennifer Rubin, et al.) who have abandoned their alliance of convenience with the post-9/11 War Department and have returned to their progressive roots.

Finally, there are the elder statesmen of the Republican Party, men much maligned by the Democrats during their active political careers—especially when running against Bill Clinton or Barack Obama for president—and then embraced as the very models of the kind of Republicans a leftist might think about voting for (sane, sober, judicious, dignified, honorable, and brimming with bipartisanship) if a leftist ever thought about voting for a Republican, which no one ever has.

Not coincidentally, these judgments generally are delivered after the demise of the Republican in question (John McCain, George H.W. Bush); in life, of course, they were vilified as sadistic plutocrats who happily caused the deaths of millions of women, children, minorities, and other living things, while marveling in privileged wonder at checkout scanners and having putative affairs with lobbyists not their wives.

Failing death, the next best path to rehabilitation and redemption is to take a shot at the man who accomplished what you failed to do twice—win the White House. And that is the path that the ineffable, “severely conservative” Willard Mitt Romney has chosen as he takes his Senate seat from Utah this week.

You remember Mitt: the man who a) courageously decided not to run for re-election as governor of Massachusetts because he knew he would lose, b) lost the GOP nomination in 2008 to the left-for-dead candidate John McCain, and c) lost the 2012 election to Obama after winning the first debate and refusing to challenge the obvious electoral hinkiness in Ohio that still has Karl Rove scratching his head.

In an op-ed in the Washington Post, the recrudescent Romney blasted the man he once begged to nominate him for secretary of state as he publicly announced his candidacy for the office of the Media’s Shadow President. That unpleasantness about the dog on the roof, or bullying the gay kid in prep school? All forgotten now!

It is well known that Donald Trump was not my choice for the Republican presidential nomination. After he became the nominee, I hoped his campaign would refrain from resentment and name-calling. It did not. When he won the election, I hoped he would rise to the occasion. His early appointments of Rex Tillerson, Jeff Sessions, Nikki Haley, Gary Cohn, H.R. McMaster, Kelly and Mattis were encouraging. But, on balance, his conduct over the past two years, particularly his actions last month, is evidence that the president has not risen to the mantle of the office. 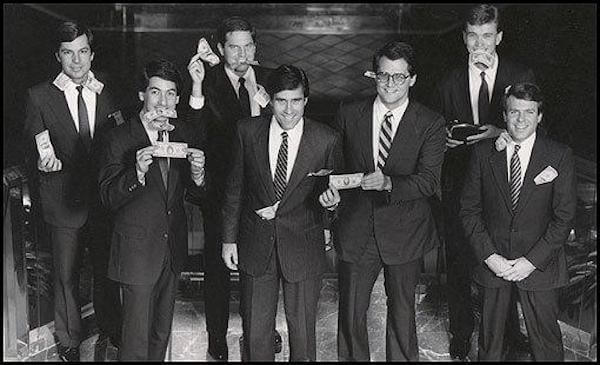 That’s Mitt front and center, holding the mantle of his office. And this from the guy who wanted Trump to give him a job in order to (as Bill Clinton famously said) “maintain [his] political viability within the system.” Mitt’s willingness to cozy up to Trump even had some completely disinterested reporters fretting: “The statesmanlike version of Mitt Romney has left the building, and the self-proclaimed ‘severely conservative’ one has returned,” wrote Karen Tumulty in the Washington Post last March after Mitt took a “harsh” line on illegal immigration.

But once rebuffed, Mitt pivoted, ran for the U.S. Senate, won, and now stands ready to inherit the mantle of Bob Corker and Jeff Flake as the only living Republicans the media will quote with approval. That both of their political careers ended thanks to their opposition to Trump doesn’t seem to have occurred to him.

Romney peppers his piece with his own policy positions (as if they mattered), offering us a window into how he sees the world. Unsurprisingly, it’s a place of comity and stability, ruled over simultaneously by the spirits of the gracious Bush I and the bellicose McCain: an interventionist fist in a velvet glove. He cites Lincoln’s appeal to the better angels of our nature, offers a high-minded interpretation of foreign policy that would have appealed equally to Jimmy Carter and Bush II, but says we must evidence “leadership” by confronting Russia and China lest we suffer “less prosperity, less freedom, less peace.” And to that end, says Romney, leadership begins at home:

To reassume our leadership in world politics, we must repair failings in our politics at home. That project begins, of course, with the highest office once again acting to inspire and unite us. It includes political parties promoting policies that strengthen us rather than promote tribalism by exploiting fear and resentment. Our leaders must defend our vital institutions despite their inevitable failings: a free press, the rule of law, strong churches, and responsible corporations and unions.

The bien-pensant boilerplate is strong in this one, as is the hypocrisy of a guy whose vulture capitalist firm strip-mined corporations, sold them off for parts, fired their workers, and told us it was for the good of the shareholders while Romney and his colleagues grew rich.

But now that Mitt’s mask has slipped, the good news is, it’s gone for good. No doubt he harbors thoughts of challenging Trump for the nomination in 2020—although he denies it—and God knows, there are exiled GOP political consultants and “strategists” across the country more than willing to encourage him for the price of their media buys. But if Mitt runs, he’ll run as a 1990s Democrat—nationalized health care and all—not only in opposition to the ogre Trump but against the Bernie Sanders/Ocasio-Cortez Democrats as well. And what a campaign that will be. I can hear the campaign song now:

Clowns to the left of us, jokers to the right, here we are, stuck in the middle with Mitt.

Perhaps “Won’t Get Fooled Again” might be an even better choice. But then, fooling people has always been what Willard’s about, and he’s got the masks to prove it.