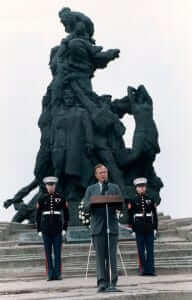 Picture Victory in Europe Day not as an hour of triumph but as a moment of tribulation in which, instead of thanking Englishmen for their strength and stamina, instead of standing alongside ministers of many parties and almost every point of view, instead of standing in defense of King and Country, Winston Churchill stood alone—behind a curtain—so as not to embarrass Germany.

Picture the scene stateside, in which Harry Truman, who was then as foreign to the English as he was to his fellow Americans, offered little in the way of determination and nothing in the form of decency; because he hated crowds and wanted to crowd out the memory of his predecessor; because he thought silence was a smart strategy—the best strategy—to subdue the public’s urge to celebrate the occasion or to commemorate the loss of Franklin Delano Roosevelt, whose words radiated hope, whose hope was to win the war, whose life was a star of hope.

If that scene is hard to imagine, because it never happened, think of what did happen when all Europe was freed—and George Herbert Walker Bush refused to go to Berlin, because he chose evenhandedness over elation.

In a life filled with hours of greatness, Bush’s response to the end of the Cold War was not his finest hour.

Were the citizens of East—and West—Germany not owed a speech by the leader of the free world? Were the people of Prague, Budapest, Belgrade, Bucharest and Sofia not worthy of an address about the sinews of peace? Were the survivors of both Hitler and Stalin not a big enough audience to attract the president’s attention?

He came at a great turning point in history.

He was a great man who was not a good president.