The Justice Department last week filed a “statement of interest” on behalf of a lawsuit by Students for Fair Admissions against Harvard University for discriminating against Asian-American applicants as a class. The government’s intervention is stronger than a mere “friend of the court” brief and portends a federal lawsuit against Harvard.

To better understand any likely outcome in this case, some familiarity with relevant case history is helpful. Due to their unusual history in America, distinct from that of other Asian-Americans, Japanese Americans have had singular experiences in the court system that are instructive today for all Americans, not just Asians or other ethnic minorities. President Theodore Roosevelt’s “Gentlemen’s Agreement” with the Emperor of Japan, which limited Japanese labor immigration and, among other things, protected San Francisco children of Japanese and other Asian ancestry from discriminatory treatment in its public schools would be the beginning of any such abbreviated history. This period of limited immigration ended with the Immigration Act of 1924, which closed immigration from Asian countries and severely restricted it for eastern and southern Europeans.

In response to Japan’s attack on Pearl Harbor, Franklin Roosevelt’s administration relocated 110,000 ethnic Japanese from the West Coast, about 90 percent of their total in the U.S. mainland population. The U.S. Supreme Court decided the major cases challenging the relocation in December 1944. While Korematsu v. U.S., by a vote of 6 to 3, authorized the initial phase of the relocation, it did not justify the  relocation centers themselves.

In fact, ex parte Endo, decided the same day, expanded the bureaucracy’s existing liberal leave policy to include all those in the centers who were loyal to the United States. The government, “has no authority to subject citizens who are concededly loyal to its leave procedure.” Free people do not require government permission to live where they wish. This unanimous decision thus dismantled the centers and allowed the residents to return to the west coast. The court timed its opinions to follow the shifting of the war front to the western Pacific Ocean and the national elections in November (thus preventing the Japanese return from becoming an election issue).

The complexity of the law in these relocation cases later was reflected in the affirmative action cases argued by liberal justices. In Odegaard v. DeFunis (1974) dissenting Justice William O. Douglas, author of ex parte Endo, criticized the “reverse discrimination” mentality: “The purpose of the University of Washington cannot be to produce black lawyers for blacks, Polish lawyers for Poles, Jewish lawyers for Jews, Irish lawyers for Irish. It should be to produce good lawyers for Americans and not to place First Amendment barriers against anyone.”

But he then concluded the University of Washington law school’s preferential admissions policies may well be consistent with the Constitution. Quite aware of how race and ethnic categories can be misused, Douglas recalled that the Japanese relocation cases should be understood as exceptions in that “those making plans for defense of the Nation . . . were planning for the worst.”

Douglas’s reference to the Japanese exclusion cases was then amplified by Justice William Brennan, in his joint opinion in the monumental Bakke affirmative action case. Brennan was a towering figure in liberal jurisprudence, who tried to use the exception posed by Korematsu to justify discrimination against racial or ethnic groups: As with the possibility of Japanese invasion, affirmative action’s enlightened goals provide a rational basis for denying rights to some groups in order to favor others.

The court’s most recent reference to the Japanese exclusion question was this past term’s “travel ban” case. Justice Sonia Sotomayor’s dissent tried to compare the Trump Administration’s alleged Muslim travel ban to the relocation of Japanese-Americans, while Chief Justice John Roberts dismissed Korematsu as overruled by “the court of history.” Neither saw the relocation justification in the light of its pairing with ex parte Endo: despotic action may be necessary to defend the nation, but the dictates of necessity are limited by the requirements of republican government.

The current case that draws together these diffuse strands of Asians in America is the lawsuit charging Harvard with discrimination against Asian-American undergraduate applicants. A new report by my wife, Dr. Althea Nagai, published last week by the Center for Equal Opportunity, focuses the attack, using Harvard’s own admissions data from 2009-2017 to show that the university consistently lied in its public representations about its discriminatory practices. No other explanation seems plausible for the results of Harvard’s admissions process that produced such uniform ceilings, with entering classes of between 15 and 18 percent Asians (excluding Asians from abroad) over the last several years. Two pie charts below encapsulate the Center’s report, and a third table summarizes how each stage of admissions whittles down the Asian numbers. (The Harvard class of 2021 has a total of 1,687 members.) The graphics were created by Althea Nagai from Harvard’s own data, which university officials have tried to disavow since it became known in discovery. 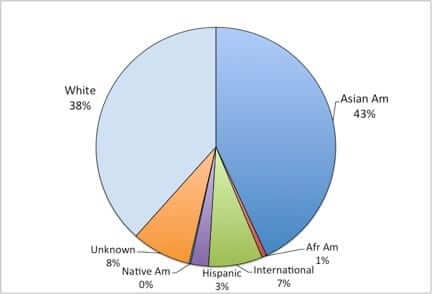 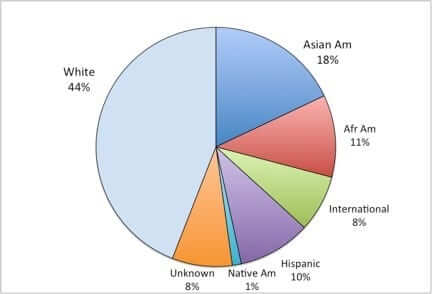 Nagai’s report points out how Harvard used different criteria (recruited athlete, legacy or alumni preference, “personal qualities,” race) to reduce Asian admissions at every stage and boost numbers of other groups. As the report elaborates, being an Asian applicant reduced the likelihood of admission, when compared with others of comparable academic merit. It is not sports or extracurriculars that hurt Asian applicants. They suffer a setback just by being Asian.

Harvard has a personal ratings system, where an applicant is judged by the admissions office on whether the person has a “positive personality,” whether “others like to be around him or her,” if s/he has such traits as “likability …helpfulness, courage, [and] kindness,” is an “attractive person to be with,” “widely respected,” a “good person,” and has good “human qualities.”

The personal qualities category is derived from letters of reference, personal essays, and interviews. The suspicion, based on anecdotal evidence from admissions personnel, is that the Admissions staff has a stereotyped view of Asian-American applicants that unfairly and illegally harms their admission chances. 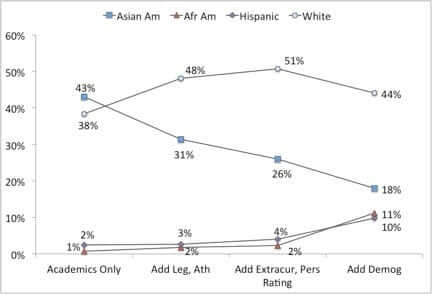 For reasons unknown and unacknowledged, Harvard set an Asian quota of below 20 percent over the last 15 years, as this graph from the previous CEO Report on Harvard shows. The contrast between Harvard and Caltech, which does not use racial/ethnic quotas, is striking. (The Harvard Asian admissions numbers for the class of 2021 went up a few points to 22 percent when the current lawsuit was filed, although Harvard’s “public” numbers may not be the same as the ones they are legally required to report to the government, the latter being based on the government’s definitions. The numbers in the Caltech-Harvard report are based on statistics reported to the U.S. government. ) 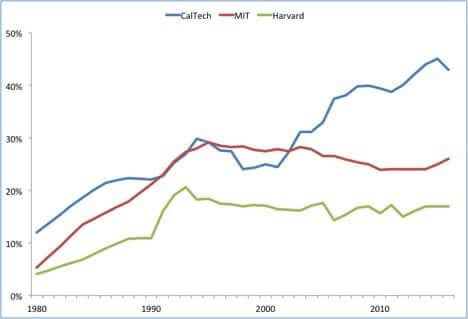 But, to construct a kind of liberal establishment defense of Harvard, one should reassess the “personal qualities” factor. A Harvard man is not Library Man. For that purpose, it’s helpful to recall how liberal icon justices Douglas and Brennan used the precedent of the Japanese exclusion cases to defend earlier racial and ethnic preference policies. One might even add a national security threat, given the high rate of Asian applicants who are immigrants or only first-generation Americans. They may lack not only commitment but loyalty to America, to say nothing of Harvard. Ever shouting “USA! USA!” Harvard might be of one voice with Bismarck about “Das gelbe Gefahr” (Yellow Peril). Thus, the Great Wall of Harvard might be seen as a measure that would permit assimilation to proceed (as the Immigration Act of 1924 intended).

But there is another way for that avatar of excellence and for us to look at the world. The recently concluded Little League World Series featured a team from South Korea and, from the United States, Hawaii. The American roster had players of varied ethnic backgrounds reflecting its home state demographics. Rather than being embarrassed to have a student body resembling Hawaii’s world champions, maybe Harvard should recall why baseball is the all-American game. The Hawaii team figured it out without a Harvard degree among them.