If one were to distill the essence of California’s Democratic party into a one-page document, it would be hard to beat a recent mail piece showing the SEIU’s candidate endorsements for California’s top jobs. According to its  website, the Service Employees International Union Local 1000 (SEIU) “is a united front of 96,000 working people employed by the State of California, making Local 1000 the largest public sector union in California and one of the largest in the country.”

Occupying the entire upper-right segment of the obverse side of this mailer is a portrait photo of gubernatorial candidate Gavin Newsom—a beatific smile revealing perfect teeth, coiffed hair swept back in an elegant pompadour, eyes shining with courage, equanimity, love. Gavin Newsom, the visionary leader, who will lead California into an even more enlightened future. And joining Newsom, the woke white puppet of the Getty oligarchy, arrayed in a row of eight portraits beneath his beneficent gaze, are his hardscrabble minions, the SEIU’s preferred candidates for California’s other state offices.

Unlike their debonair white male overlord, these candidates were born woke, and virtuous by virtue of their genetics. Five Latino males, two Asian females, and a Black male constitute Gavin Newsom’s electoral coterie. And with that prerequisite established, only one additional virtue is required to please the SEIU: a commitment to hard-Left identity politics. And this dream team doesn’t disappoint. 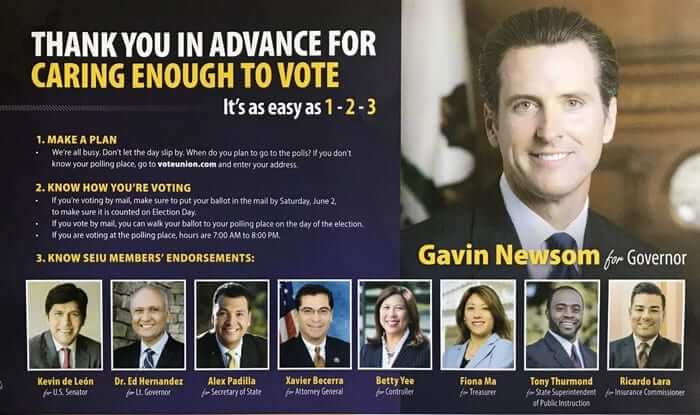 Kevin de León, backed by Tom Steyer and now running for U.S. Senate against long-time incumbent Democratic Dianne Feinstein—frequently refers to “President Trump’s racist-driven deportation policies.” But open borders is only part of the leftist agenda, and de León’s campaign website makes very clear that he is all in, supporting free public education, converting the entire nation to using “only renewable energy by 2045,” and, of course, a single-payer health care system. It does not appear that de León has the slightest idea how we will pay for all this.

What de León advocates is more or less representative of what all these hard-left candidates advocate, with various differences in the details.

Lt. Governor candidate Ed Hernandez, for example, calls for increasing California’s education budget by “$3,600 more per student,” which, if applied to California’s 6.2 million K-12 students, would cost another $22.4 billion per year. And where will that money come from?

Alex Padilla, running for reelection as California’s secretary of state, naturally joins the leftist chorus on the big issues while offering specific policies intended to increase turnout of everyone likely to vote Democrat. As documented on his campaign website, Padilla has seen to it that Californians are “automatically registered to vote when they apply for or renew their driver’s license,” he’s “launched online pre-registration for 16 and 17 year olds,” and implemented “vote by mail, ten days of in-person early voting, and the flexibility of voting at any vote center in the county.” And naturally, Padilla has “consistently pushed back on Trump’s baseless allegations of massive voter fraud,” since using public sector union nonpolitical funds to pay for thousands of operatives to knock on doors and collect vote by mail ballots isn’t technically fraudulent, is it?

These candidates offer no surprises. California’s Attorney General Xavier Becerra, running for reelection, has said “Trump was showing himself to be a racist in every respect.” That sort of passion informs what appears to be Becerra’s primary activity, suing the Trump Administration. Through May 2018 Becerra has filed 35 lawsuits against various federal agencies, attacking everything from the EPA’s attempts to standardize fuel economy standards, to the supposedly outrageous plan to include a citizenship question on the 2020 census form, to, of course, protecting “sanctuary cities.”

When it comes to leftist radicals, perhaps Democratic Assemblyman Ricardo Lara—now running for insurance commissioner, presents the best credentials. In late 2016, when incoming President Trump proposed to deport criminal aliens, Lara stood on the floor of the state legislature and threatened to “fight in the streets” to preserve “the work we have done.”

With the possible exception of Fiona Ma, running for state treasurer, who briefly worked for a public accounting firm, none of these candidates have a background in business. They have spent their entire careers either working in the public sector or working for activist nonprofits. This makes them perfectly suited for the oligarchs and powerful labor activists that constitute their base.

The irony of what these candidates will do—and most of them are expected to win—is lost on the voters to whom they  appeal. Many of these candidates have inspiring family stories. Most of them come from recent immigrant families, and all of them have done well in their lives and their careers. But they experienced this success because they lived in California before the policies were enacted that are now stifling the aspirations of newcomers and residents alike. And the hard Left policies they would advance will make life in the Golden State harder still, unless you’re a destitute immigrant or a well-connected left-wing oligarch.

It’s relatively easy to see why oligarchs support California’s leftist regime. They like restrictive policies that create artificial scarcity because that increases the value of their preexisting assets, especially real estate. They like crippling regulatory burdens on businesses because that makes it much harder for their emerging competitors to survive. The barons of Silicon Valley love the mandated sensors and embedded chips and internet enabled appliances—all to “save the planet”—because they make billions manufacturing these components. And, needless to say, they want millions of immigrants, desperate for work, readily available to clean their toilets and trim the hedges at their private schools.

It’s more difficult to understand why the SEIU, or any activist organization that purportedly fights for the average worker, would support such policies. Why would a labor union, for example, support open borders? Don’t they understand that if you continue to import low-skilled workers, wages will remain low? But maybe these labor organizations don’t want things to improve for California’s low income communities. Maybe the worse things get, the more members they’ll recruit, the more resentment they’ll exploit, the more agitators will join their army. Maybe this is just about power.

Evidence to support such a cynical assessment of big labor’s true agenda isn’t hard to find. One telling example was SEIU 1000’s successful effort earlier this month to force the California Healthcare Facility in Stockton to hire government workers—SEIU members—and terminate their contracted staff of private-sector workers. The heartless essence of this story is in the details: janitorial workers were trained and placed by PRIDE Industries, an organization that employs people with mental and physical disabilities. Now they’re out of a job that, by all accounts, they were doing well. But SEIU 1000 has more members, more dues, and more power. Apparently for them, that’s more important.

If Gavin Newsom and his gang of eight, all endorsed by the SEIU, win in November, it will be a victory for the oligarchs and the activists. But it will not be a victory for hard-working Californians. Maybe someday California’s voters will learn.