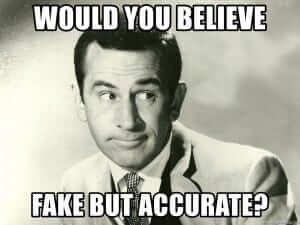 So a crying child is big news. And her photo is everywhere.

Why? Because it’s Trump’s fault.

That’s a familiar refrain, that’s getting a bit old, don’t you think?

Children cry. That’s what they do. Anytime, anywhere. They even cry at Disneyland. Ever blow the rent money on a full array of Disney schlock for your kids? But then you say “No” to just one more Moana doll. Oh, the screams and the tears. What a spectacle! Your child carries on as if she’s just endured a tortuous 3,000-mile trek from Central America.

Of course, the children of these illegal immigrants have done just that. Disneyland was nowhere to be found on their TripTik. Children arrive and face an environment they find different and strange. They’re exhausted and hungry. And they cry.

Never mind that the Time magazine cover child never was separated from her mother. Time found out their story was bogus, and even issued a correction: “The girl was not carried away screaming by U.S. Border Patrol agents; her mother picked her up and the two were taken away together.”

Quite a correction, but no reason for Time to pull the magazine from the racks.

To the Left Stream Media, what is real and what is true is of no concern. Just like Dan Rather’s manufactured hit piece on George W Bush’s Texas National Guard service, they consider any narrative hostile to Trump as “fake but accurate.”

And they’re not about to stop, There’s no shortage of photos and videos of crying children. The children might be at the border, or at detention centers. Or they could be anywhere in the world. Fake but accurate is what leads.

As long as they can present a heartrending image that seems to impugn President Trump, they’ll go with it. So next time you see a picture of suffering children, as damning as the picture may be―like this one―don’t believe it for a second.