The saga of Kanye West’s recent transformation into a free-thinking, ostensibly right-leaning Twitter phenomenon brings with it interesting developments for the Right. One of these results is a widening of the divisions among what I like to call the “Young Right.”

At the epicenter of this divide is the organization Turning Point USA, a 501(c)(3) nonprofit group that has inserted itself directly into the spotlight on the heels of this and many other of the latest socio-political dustups, despite having only been founded in 2012. Whether it’s through Candace Owens’ central role in the Kanye saga, or the group’s hiring of Kyle Kashuv, the pro-Second Amendment Parkland shooting survivor, TPUSA undoubtedly has taken huge steps to frame the narrative and utilize the most prominent voices charging forward on whatever happens to be capturing the popular imagination on cultural/political front lines. The organization has also capitalized on founder Charlie Kirk’s close relationship with the Trump family.

In response to TPUSA’s meteoric rise, a recent article in Vice by libertarian student Will Nardi declares “TPUSA is a safe space for the worst of campus conservatism,” and that “right-leaning students can do much, much better.” The result is an annoying combination of the most basic leftist talking points and the usual platitudes of pearl-clutching “principled conservatives.”

Even in his opening lines, Nardi displays a complete lack of perspective or ability to grasp the central issue. Announcing that Kanye has stirred up “outrage” in the past month, Nardi just drops the assertion at the top of his piece without going into specifics. Who is outraged? Why? If stirring up outrage is a supposedly a problem, don’t these questions matter?

Since this kind of indignant assertion is common and oft-repeated in his article; I will use the phrase “citation needed” whenever necessary to point it out. Things may get . . . repetitive.

The article’s original title reflects a similar cluelessness: “This Kanye-Endorsed Group Is Ruining Campus Conservatism.” (The headline since has been changed; perhaps Vice’s editors realized they’d gone over the top? See screenshot.) 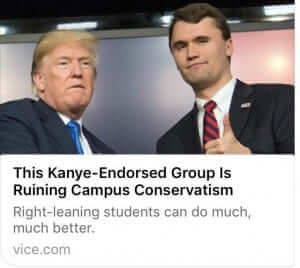 Not only is the claim of an endorsement by Kanye worthy of a (citation needed) but this label is slapped onto the organization with the clear intention of being an insult. If anything, the would-be slight has the opposite effect. TPUSA seems more interesting, not less, because of its perceived association with West. But people like Nardi are so blinkered by their orthodoxy that they miss this.

The new title aims to be no less snide, however, and remains just as false: “I’m a Campus Conservative and I Can’t Stand This Right-Wing Group.” Way to supply your Leftist overlords with the only kind of red meat they’ll eat: the kind laced with right-wing infighting and self-flagellation. But, of course, this all assumes that libertarians like Nardi are actually part of a politically viable Right, which they aren’t. But I digress.

The Usual Guilt-By-Association Fallacies
Nardi then accuses TPUSA of racism, all because four former employees of the organization were discovered to have made racist comments about African-Americans in their social media feeds. While the comments in question are reprehensible, the idea that this makes all of TPUSA racist is just as idiotic as claiming that Donald Trump is a white supremacist because he was endorsed by David Duke. Remember: the employees involved are now ex-employees.

The self-described libertarian then ramps up the increasingly left-wing rhetoric as he lists ever more reasons to dislike TPUSA, going after their annual conferences—or, as he describes them, “donor-subsidized safe spaces” that feature “propaganda” (citation needed). He further criticizes them with the stinging rebuke that such conferences are not eternal (gasp!), and the attendees must eventually go back to “the real world” and come to the realization that “the real world isn’t a never-ending Trump rally.”

Nardi asserts that “they organize speaker events” and “recruit more naive kids” after attending such conferences. How awful of them! Nardi does not offer any explanation about what makes TPUSA’s conferences any different in these respects from other “safe space” conservative conference like those of CPAC or the National Conservative Student Conference (NCSC).

Nardi chastises TPUSA for inviting such individuals as former Breitbart editor Milo Yiannopoulos and Gateway Pundit White House Correspondent Lucian Wintrich to speak on campus. He says that when he found out that the TPUSA chapter at his college was going to host the latter, he emailed the national TPUSA office to “warn them of who they were inviting,” since he claims Wintrich is “conspiratorial” (citation needed).

He blatantly admits to trying to de-platform a right-wing speaker with whom he disagrees, even though he admits a few sentences later that this is a left-wing tactic.

Whose Cult is it Anyway?
After reaching this pinnacle of hypocrisy, Nardi makes a dramatic hard-right turn with a lecture more typically found on the web pages of The Blaze or The Weekly Standard.

TPUSA, he says, “is less a conservative organization than a cult of personality around Trump, with Kirk as the high priest.” This is weird given that Kirk was actually anti-Trump during the election. I grant Nardi that it has been interesting to watch Kirk suddenly shift into such a pro-Trump cheerleader after November 8, 2016, but one could say that about a lot of people.

Nardi then claims that TPUSA “breaks with traditional conservatives in nearly every possible way.” (Citation needed.) His only piece of “evidence” is a Tweet from Candace Owens in which she calls Trump “the savior” of Western Civilization. He rather snidely remarks that “As a Christian, watching anyone use the word savior for anyone besides the son of God is frankly jarring.” I certainly was not aware that “traditional conservatism” was all about religious language policing, a tactic that combines the worst of the politically correct left and the ultra-religious right.

And it is here, towards the end of the article, where Nardi gets to his “solution” to TPUSA and the scourge of the pro-Trump crowd: He promotes alternative groups. One example is Young Americans for Freedom, a group with which he proudly declares his involvement because it was founded by “conservative icon” William F. Buckley, and “continues to memorialize the legacy of Ronald Reagan’s personality.” So according to Nardi, a cult of personality around Trump is bad, but a cult of personality around Reagan? Very good.

While Reagan undoubtedly was a great president, he has been gone for 14 years and he left office 30 years ago. Chasing a great man’s ghost is every bit as effective as chasing after Coolidge’s legacy or asking “What Would Lincoln Do?” about MS-13. If there are lessons there (and there are!) they are not obvious. They are subjects for study and debate rather than rallies.

Moreover, Buckley’s legacy is most certainly in tatters. The times have eclipsed the existential crisis facing the nation when he rose to prominence and, necessarily, the politics have changed. We aren’t fighting the Cold War anymore. And our internal cold war has moved to new fronts as we’ve lost ground on others.  Buckley’s one lasting accomplishment is the (more or less) anti-Trump National Review, which has recently suggested that conservatives shouldn’t dismiss feminism and that a “compromise” is necessary on transgenderism.

Into the Real World
I, too, was involved in YAF in college. I interned for YAF’s Ronald Reagan Ranch Center in Santa Barbara for a year and a half and was the founding chairman of the YAF chapter at the University of California, Santa Barbara. From my experience, while there were some anti-Trump students in the organization, there were plenty of pro-Trump voices, too. Among YAF’s most prominent connections to the Trump White House are Jeff Sessions and Kellyanne Conway. Their most recent NCSC in 2017 featured prominent pro-Trump voices such as Newt Gingrich, Dennis Prager, and Nigel Farage, as well as Trump Administration officials like Conway, Ben Carson, and Vice President Mike Pence.

Nardi then suggests more libertarian alternatives for “non-Christian conservatives,” even though libertarianism isn’t “conservative.”He pitches a group called “Students for Liberty.” He supports this alternative by claiming that “Trump’s commitment to conservative economic orthodoxy is shaky at best.” The idea that there is such a thing as “conservative economic orthodoxy,” in the sense of checklists and policy prescriptions rather than a principle of protecting American interests first, is precisely the thing that distinguishes libertarians from conservatives, it turns out. Considering Trump has done more to deregulate the U.S. economy and cut taxes than any president in recent history, I’m curious as to how Nardi can prove his claim without falling into the error of equating libertarianism with conservatism, but . . . citation needed.

In addition, Nardi suggests the Intercollegiate Studies Institute, also founded by Buckley. Sounds exciting, right? According to Nardi, ISI has “an emphasis on reading groups and academic conferences.” Because when I think of going into battle with the Left, my go-to weapon is a reading group. (Perhaps if you throw the books hard enough . . .)

Nardi concludes by asking us to live “in the real world” rather than “in Trump’s fantasy,” and that he feels sorry for “the people hiding in TPUSA’s safe space.” Last I checked, Donald J. Trump is president of the United States in the real world. I would think that charges of inhabiting a “fantasy” or a “safe space” stick far more damningly to so-called “conservative” groups that pretend President Trump doesn’t exist and that they can go about their work as though 2016 never happened.

This entire catastrophe of a non-argument boils down to just another individual who is jealous about TPUSA’s massive strides in the culture war, in the same way Tomi Lahren is. TPUSA is not focused on praising leaders of the past or in organizing reading groups about economic conservatism (however laudable such enterprises might be in the abstract) because they’re fighting the culture war through unusual—but effective—conduits like Kanye West in the here and now. You might almost call it the real world. In so doing, they’ve recruited more African-Americans to the Right in just a few weeks than “principled conservatives” have done in 50 years.