Today, we argue about the murder of 17 people by an expelled former student at a high school in Parkland, Florida.

Like the massacres themselves, each ensuing controversy has a sameness about it. Sometimes, individual features bring out special side disputes. Does the San Bernardino massacre show we need to restrict Muslim immigration? (I thought so, and, for a time at least, Donald Trump seemed to be saying so.) Was the Orlando massacre an instance of deadly homophobia or Islamic jihad, or was it perhaps the result of an Islamic jihadist’s gay panic? (I’d guess all of the above.)

Should the Fort Hood massacre be classified as terrorism, or as “workplace violence”? (I say neither. We are at war, and for the enemy, Fort Hood was a legitimate military target. The shooter, who was an American citizen making war against the United States, should have been charged with treason, one count, and hanged forthwith.)

In every case, however, the debate is dominated by the same antagonists pushing the same agenda. Liberals take each one as further proof that America needs gun control. Those on the right respond by going into a defensive crouch, citing the need for better mental health services, smarter security measures, more citizens going armed and ready to defend themselves, friends and neighbors.

Count me alongside those on the right. After the Sandy Hook massacre, a raft of Hollywood celebrities took part in a stern television ad promoting gun control. “Enough,” they said. “It’s time,” they said. “As an American, . . . as a human being, . . . Demand a Plan.” You’d need a heart of stone to resist their plea. But after seeing the devastating remix an anonymous YouTuber posted in retort, you may (like Oscar Wilde) need a heart of stone not to laugh at it.

Not that I look down on those celebrities. I’m just as prone to ax-grinding as any smug liberal do-gooder ever was. Who can blame them, after all? They really do believe that making the Second Amendment “go poof” would save future victims’ lives. They really do believe that for seeing the matter differently, the NRA, the GOP, and conservatives in general “have blood on their hands.” Give the liberals credit at least for caring enough about “gun violence” to argue over it.

And now let’s get to my own ax-grinding specialty. The answer to these massacres, and to violent crime generally, isn’t gun control. It’s the gallows.

Very few murderers are nihilistic maniacs who slaughter their victims and then themselves. The vast majority seek to avoid detection, capture, and prosecution, and, if convicted, they use every means society places at their disposal to avoid execution. As for the undeterrable few, the suicidal mass killers, it’s not unreasonable to suppose that they too have been tempted and inspired by an atmosphere of rampant violence and impunity.

From George Hennard in Luby’s Cafeteria to Adam Lanza in Sandy Hook Elementary School, there is probably not one of them who did not see himself as a triumphant figure laying waste to his enemies, like Schwarzenegger striding through the police station in “The Terminator.” That image, which sociopaths find so awesome and alluring, is drawn from popular culture and cannot be erased without doing as much damage to the First Amendment as gun confiscation would do to the Second. But that image can be superseded by another, more repellent one, drawn from grim reality: the murderer as a pathetic, detestable loser, hanging by his neck from the end of a rope.

The reality we face today is grimmer still. Thousands upon thousands of innocent Americans are being cruelly murdered, year after year, while their government fails to protect them with the full force of the law.

I can’t really improve on what I wrote about this shortly after Sandy Hook:

Whenever a gun massacre occurs, conservatives’ chronic silence about crime allows liberal gun-controllers to flatter themselves that they are the champions of public safety and the defenders of innocents, and to pass themselves off as such to the public. These inveterate opponents of capital punishment are never made to answer for the fact that their campaign against its enforcement has caused many more Americans to die at the hands of previously convicted murderers than in any of the infamous mass shootings liberals carry on about, or in all of them put together. And that says nothing of the hundreds of thousands of murders committed by killers undeterred by a death penalty that is hardly ever enforced.

Because conservatives have been silent about crime, the Newtown massacre makes us look like unfeeling bastards, more concerned about our precious gun rights than about slain schoolchildren. We may well argue that the left’s gun-control agenda is impractical, ineffectual, and unconstitutional, but if we want it to remain unpopular and unenacted, we’d better offer some “commonsense solutions” of our own. Our slogan has long been: “Guns don’t kill people; people do.” Let us follow that idea to its logical conclusion. While liberals pursue their impossible dream of eliminating murder weapons, we should be setting about the very practical, effectual, and constitutional task of eliminating murderers.

The cost our failure to confront crime exacts from crime victims is obvious. But what has that failure done to us politically?

American Greatness contributor Henry Olsen recently lamented the fact that in all the years since the Great Depression, Republicans have never surpassed Democrats in Americans’ party affiliation. You will search his article in vain for the word “crime,” and he is by no means an exception. To take just one example, after the GOP lost control of Congress in 2006, The American Spectator published a symposium in which leading conservative thinkers considered the Republican Party’s next move. They talked about taxes and earmarks and entitlements and “the growth of government,” and they prescribed a return to small-government conservative principles. None of their essays mentioned crime. 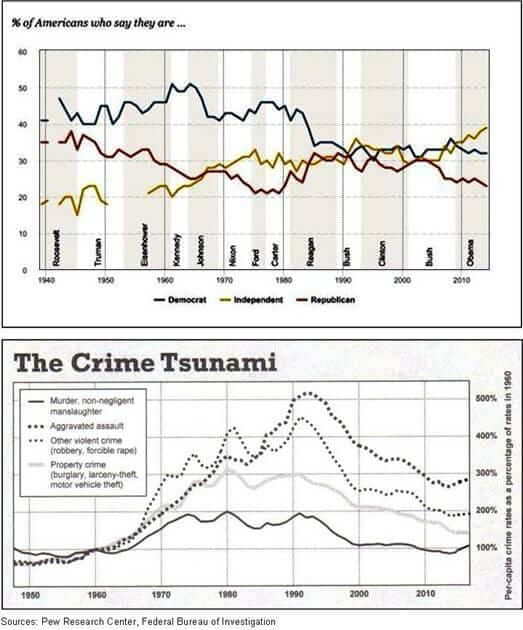 If, however, you look at the party identification trends Olsen cited alongside a chart of crime’s rise and fall since the mid-20th century, you might just see the elephant in the room. Notice that the Democrats suffered a big loss of the public’s confidence, claiming the loyalty of 51 percent of Americans under JFK in 1961 but keeping only 31 percent of us in their column 30 years later. This plunge came just as crime swelled into what I call our Great Crime Wave. And that is no coincidence. The Democrats’ “tax and tax, spend and spend, elect and elect” formula may have been a racket, but it was a winning racket for them until their softness on crime brought them to grief.

Yet the Democrats’ loss was not the Republicans’ gain. Richard Nixon won the presidency in 1968 partly due to concern about crime in the streets, but in office he was no help. An unseemly bout of crime in the suites led to his resignation. His successor, Gerald Ford, had nothing urgent to say about crime. A month before Ford and Jimmy Carter faced the voters in 1976, an elderly South Bronx couple who had been robbed and tortured, twice, in their own apartment hanged themselves, leaving a note that said they didn’t want “to live in fear anymore.” Neither candidate even noticed.

Then came Reagan. His election could have heralded the end of the Great Crime Wave, but it did not. Neither did Reagan usher in an era of single-party dominance. While his foreign and economic policies did indeed set the stage for victory in the Cold War and sparked an historic economic boom that overcame the “stagflation” of the Carter years, the sickeningly high crime rates that were a major part of the Carter malaise just took a deep breath and then climbed higher and higher.

The only post-Reagan presidential election in which the GOP really mopped the floor with the Democrats—the 1988 matchup between George H.W. Bush and Michael Dukakis—is a testimony to the people’s hunger for the return of law and order.  Bush—a weak candidate with shaky conservative credentials and no political charisma—was way behind Dukakis in the summer polls. Yet in November, Dukakis lost in a landslide. A focus on prison furloughs, revolving-door justice, and the death penalty had killed his candidacy.

Unfortunately, no decisive action against crime flowed from that. Bush, like Reagan before him, failed to stem the crime tsunami, and four years later, with violent crime at record levels, he was shown the door.  Failure to deliver results on crime, more than anything else, is why Bush lost.  The Republican Party of the 1980s and ’90s had missed its chance for a great political realignment.

Now we have Trump, who hit the hustings and declared, “I am the law and order candidate”; who accepted the nomination and vowed that today’s crime and violence “will soon—and I mean very soon—come to an end”; who took the presidential oath and proclaimed, “this American carnage stops right here and stops right now.”

Will Trump treat crime as previous Republican presidents have treated it: as something to be exploited as an issue while campaigning and handled with indifference while governing?  Or will he take the steps necessary to back up his bold talk? We all await the answer.

4 responses to “Another Day, Another Massacre, No Movement on Crime”